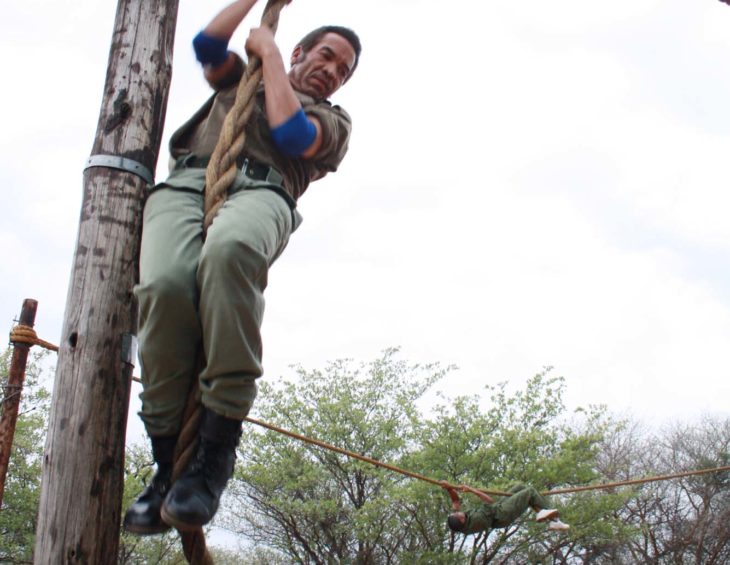 Under the leadership of President Khama, Botswana is facing a possible downgrade from rating agency Standard & Poor (Pic Mmegi)

International credit rating firm, Standard & Poor (S&P) warned this month that Botswana faces a “deteriorating outlook” in 2017, a move that suggests the dreaded downgrade from A-/A-2 sovereign credit rating could be on the horizon. Under the leadership of President Khama, Botswana is facing a possible downgrade from rating agency Standard & Poor (Pic Mmegi)

S&P issued a ‘Sovereign Rating Snapshot 2017’ in the first week of January on its website warning that Botswana alongside Zimbabwe, South Africa, Mozambique, DRC and Zambia face a negative outlook. The snapshot, a brief summary of how the global economies will fare in 2017 did not provide details and reasons for a possible downgrade.

However, a senior government official shrugged off S&P’s concerning expressing confidence that the poorly diversified mineral led economy will not be affected by the possible downgrade and that Botswana will recover along with the global environment.

“I am not concerned,” Dr. Taufila Nyamadzabo, Secretary for Economic and Financial Policy in the Ministry of Finance and Development Planning said this week purring at S&P’s concerns about a flagging economy.

“We just need to improve our budget deficit by diversifying products of the economy which results in increased revenue streams.” Mining, especially diamond contributes a third to the GDP in Botswana.

But beneficiation – a process by which Botswana extracts more value from each diamond mined on its territory as well as from some diamonds mined elsewhere in the De Beers empire – has not helped diversify economy. More than four De Beers accredited diamond polishers have closed down due to poor cash flow, suggesting that beneficiation has not been a solution to economic diversification.  Diamonds continue to be the number one revenue earner for Botswana, contributing around 80 percent of export revenues.

De Beers and Botswana’s Okavango Diamond Company (ODC) sales began falling by over 20 percent in the first half of 2015, after ODC cancelled atleast two sight sales, while De Beers sales declined as well.

Government pins its hope on the fact that the global economy is forecast to improve growing by 2.8 percent in 2017.  “It will benefit our economy which will rebound,” an optimistic Nyamadzabo said.

Weighing on the matter, analysts interviewed by The Business Weekly and Review linked the possible downgrade to a subdued economic environment and said investors – anxious at the direction of the mineral led economy – will lose confidence in such an economy.  Another analyst added that a downgrade may impact the ability of the country to lend from domestic and international institutions such as the World Bank and International Monetary Fund (IMF).

“We will be looked differently by the lenders,” notes Ishmael Radikoko, finance lecturer at the University of Botswana (UB).

Latest available data shows that the SACU CRP registered a surplus with respect to the 2012/13 and 2013/14 financial years respectively, following its annual audit. The surplus in these years supplemented the 2014/15 deficit, which is why member states shares were on an upward trend. However, the Secretariat warned that global economic growth will be subdued and that SACU trading partners will also experience a slowdown in total trade. Data also shows that trade will also affect the revenue pool in the negative, which means that Botswana will probably get a smaller share out the SACU CRP and consequently diminishing state revenue.

SACU receipts account for over 25 percent of state revenues which increases the vulnerability of Botswana’s fiscal position. However, Sebabole said that while the country is at the risk of being rated negatively, this will not affect the cost of credit that Botswana will incur in assessing external debt for project funding. He said if it happens, it will be a negative signal.

For his part, Moemedi Mosele, a market watcher at Motswedi Securities, echoed Sebabole’s sentiments, adding that a downgrade  – though unlikely – will “increase our cost of sovereign debt” and spike interest rates, currently at 6 percent

The World Bank estimates Botswana’s sovereign debt to be at around 21.6 percent of its total Gross Domestic Product (GDP), a significant increase when compared to the time took office in 2008.

The economy shrunk by 0.3 percent in 2015, according to figures from the central bank as output dropped in the mining sector alongside persistent power cuts and water rationing which impeded factory production as well as a chronically high unemployment.

In an economy of 2.2 million, only 407 482 people were formally employed as at June 2016, according to the national accounts office, Statistics Botswana (SB), which translates to a small fraction of the economy. Formal unemployment rate is however at 20 percent. Efforts to create jobs by President Ian Khama’s administration have been less than successful, with the best being Ipelegeng, a social welfare programme that pays less than P500 per month.

Late last year, President Ian Khama injected P3.5 billion as an Economic Stimulus Programme (ESP) with the hope of propping up a flagging economy, but there has been marginal evidence of the ESP and its effects on the economy. As at September 2016, Bank of Botswana balance sheet shows that there was P79.9 billion in Botswana’s foreign reserves. Most of this money belongs to the private sector, government has only about P33 billion. However, the P79.9 billion in foreign reserves was almost P7 billion lower than the amount recorded during the previous corresponding period.

Last year the state tapped into foreign reserves, and the nation was told that the ESP was being initiated to jump-start the ailing economy.  Available statistics shows that government may have drawn down a total of P3 billion from the foreign exchange reserves in a period between December 2015 and March 2016, which led to a decline in the total reserves. A 2016 quarterly economic review by independent economic consulting firm, Econsult Botswana, reveals that Foreign Exchange Reserves decreased by 3.5 percent from P84.9 billion in December 2015 to P81.9 billion in March 2016, which could only suggest a draw down by the current penniless government.  However six months later, the foreign reserves further declined to P79 billion. It is only safe to say that the reserves are on a downward trajectory, which if maintained would be disadvantageous to Batswana.

The projected deficit of around P7 billion, will also be financed either from the foreign reserves or by debt.

S&P’s concerns about a low growth outlook comes on the backdrop of a previous warning in December last year that diamond mining has lost its shine in 2015 and 2016 following a slump in prices. Other minerals such as copper have also been affected by a global slump in prices. Data from Statistics Botswana shows that copper prices have not recovered since touching an all-time low of P374 million in the third quarter of 2015 of weak demand.