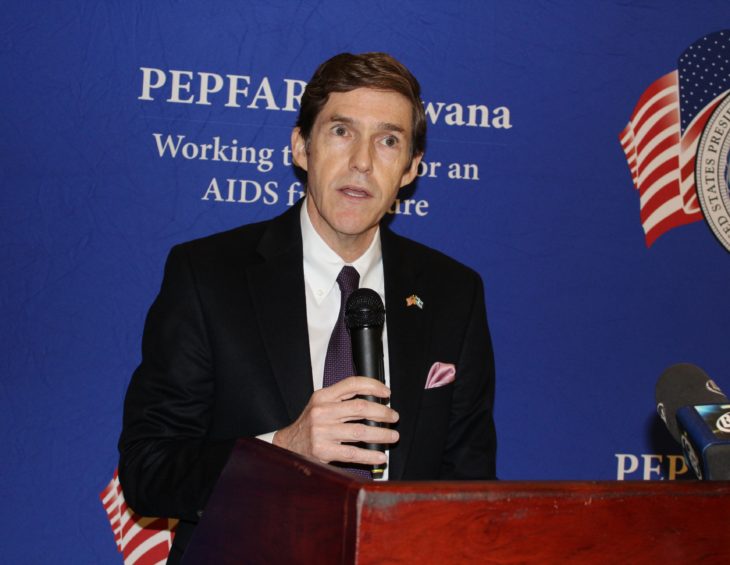 The US government has pledged to continue supporting Botswana efforts to create an AIDS free generation. Ambassador Miller said the US government will contribute around P500 million to support Botswana with its fight against HIV in 2017.

Lets us end violence against women

It is nice to visit Francistown again. I am pleased to see the New Directions program coming here for the first time. This is certainly a wise choice, given the leading role this city continues to play in the HIV response for the northern region of Botswana.

The theme of this two-day seminar speaks to a very serious health issue that is rarely talked about, or even thought of, as a health issue: Gender-Based Violence, or GBV.

Violence against women and girls is among the most pervasive, persistent, and distressing violations of human rights in the world. The United Nations estimates one in three women worldwide will experience physical or sexual abuse in her lifetime. No country is immune from this problem, including my own.

What is probably less known – and what you will hear during this two-day seminar – is just how closely related gender-based violence is to HIV and other health issues. Our presenters and panelists will speak in detail about how gender inequality, and gender-based violence in particular, is directly tied to women and girls’ access to health services, their power to make health-related decisions and disparities that lead to earlier HIV infection.

Consider the following from a 2013 Botswana survey:

 Batswana women who experience GBV are 50% more likely to be infected with HIV than women in non-violent relationships.
 53% of women surveyed had unprotected sex because their partners refused to use condoms.
 23% of pregnant women experienced violence during pregnancy.

Violence against women also has significant economic costs, including health-care costs, lost income for women, decreased productivity and negative impacts across generations. Like many nations, Botswana’s official statistics only capture the small percentage of incidents of violence that are reported to police, yet they are quite staggering.

The Ministry of Defence, Justice, and Security reported that during a three-year period between 2012 and 2014, there were more than 6,000 cases of rape against women and girls – that is more than five cases of rape every day. During the same period, 235 women were murdered and nearly 1,600 cases of defilement against girls under the age of 16 were reported. And what is the consequence? 407 of these girls dropped out of school due to pregnancy, losing many opportunities that are open to secondary school graduates.

These are not statistics, these are our mothers, our daughters, our spouses, our friends and our co-workers. There are many of us in this room who have witnessed this violence first-hand. Although men and boys are also victims of violence, they represent the vast majority of perpetrators. Despite the long history of this problem, we do not accept violence as normal or justifiable, and we must come to the defense of these victims now.

We must use forums such as this one to understand the problem and coordinate our respective courses of action with a greater urgency than before. The U.S. Mission has placed gender equality and the prevention of gender-based violence as a high priority within all of our agencies and programs. I am happy to report that this will be the major focus of the next two days.

As you all know, last week was World AIDS Day, and a lot of us were reflecting on the efforts made during the past year in the fight against HIV. This year was a monumental one for Botswana – not only did Botswana celebrate 50 years of independence, it also made history with a move towards controlling the HIV epidemic through the adoption of a new and progressive treatment policy called “Treat All.” I am optimistic this will be our best shot at finally ending the long struggle against HIV.

My government, through the President’s Emergency Plan for AIDS Relief (PEPFAR), is supporting the move to Treat All with the goal of helping this nation reach epidemic control in the next three years. Over the last decade, PEPFAR committed more than $750 million to Botswana in the response to HIV. We are investing another $48 million in 2017 to support community programs, health facilities and for the purchase of drugs. With the Government of Botswana, civil society, development partners, and dedicated responsible individuals like you, we will reach our goal of an AIDS free generation together.

We must all do our part. And today, I am happy to recognize 12 individuals who over the last year have gone above and beyond to ensure a healthy future for the youth of Botswana. These PEPFAR Heroes were nominated by their peers and selected by a committee for their personal and professional contributions to impact the lives of young people.

Included in this exclusive list of achievers is 33-year-old Gaborone Mayor Kagiso (Kah-hee-so) Calvin Thutlwe (Too-tway), one of the youngest mayors in Africa. The Mayor tested for HIV publicly and was appointed to lead Southern Africa mayors in the “Mayor’s HIV Test Drive” as part of the United Nation’s 90-90-90 Strategy. His energy and outspoken leadership on HIV/AIDS issues has been refreshing and inspiring.

In addition to the mayor, I would like to congratulate every one of the following 11 heroes:

Achieving an AIDS free generation in Botswana, once an unlikely dream, is now within our reach. It will not happen automatically, or easily, but we will get there. The selfless inspiring work of our PEPFAR heroes will help us get there. Bold policy commitments like the one that brought us Treat All will help us get there. And our continued focus on and response to gender based violence will get us there.

Together, we will get there, giving our children and grandchildren the greatest gift one generation can pass to another: a healthier, safer, brighter future.

I welcome you all to join in the discussions over the next two days and wish you success as you embark in some new partnerships and impactful activities in the weeks and months ahead.

U.S. Ambassador Earl R. Miller was officiating at a two-day PEPFAR New Directions in Global Health at Cresta Marang Gardens, Francistown on the 7th of
December 2016