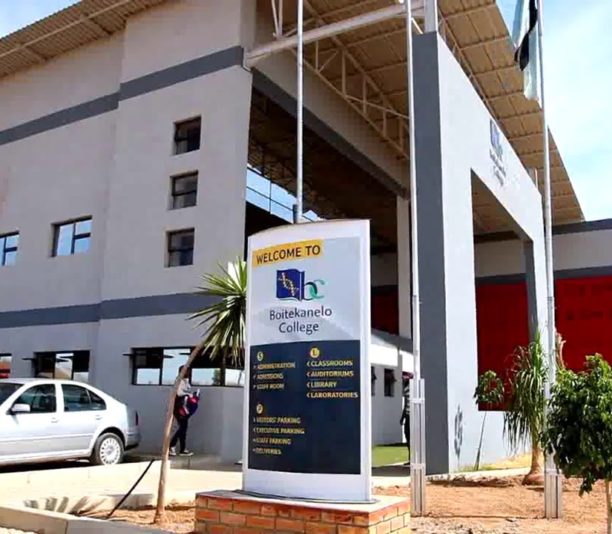 An audio recording leaked to the Botswana Gazette newspaper has turned a harsh light on the financial problems of a major Southern African health education institution, Boitekanelo College in Gaborone.

The recording, of a conversation in May this year between Boitekanelo’s co-founder and president Tiro Mampane and its now-departed vice-chancellor, Omur Cinar Elci, reveals that Elci bitterly protested about the termination of his three-year contract after five months and that staff retrenchments at Boitekanelo are on the cards.
It is understood that staff salaries at the college were paid a week late last month.
Mampane, Botswana’s leading health entrepreneur, is heard to say “we are having … financial challenges” and that “maybe we brought you [Elci] too early”. He adds: “We we are at a point where we ask ourselves if this business is viable or not.”

Elci, a Cypriot and former professor in the school of medicine at the University of St George’s in the Caribbean island of Granada, left Botswana (when?).
The financial problems follow a period of phenomenal growth since Boitekanelo’s launch in 2007. On its website it boasts 350 staff members and 2 600 students, including a number from elsewhere in the region.
Offering degrees, diplomas and certificates in a range of health-related fields such as occupational health, pharmacy technology and emergency medical care, it does research and consults for the SADC.
Describing itself as a “a leading contributor to regional knowledge on health education and generating high-level thinkers within the health sector”, it adds that the college has a satellite campus in Swaziland and is planning another in Zambia.
In the recording, Mampane says low student numbers have forced the college to to restructure.
His initial strategic plan had been to increase student numbers and fees to make the business sustainable. However, Botswana’s education ministry recently froze tuition fees and student admissions at all tertiary institutions.
“To compensate”, the college had sent a letter to the the Commissioner of Labour announcing its intention to retrench staff.
“It’s unfortunate that … if we admit less … students, in the next two or three months we will have financial obligations and would not be able to sustain our operations,” he says on the tape.
In the recording, Elci says that he came to Botswana believing in Mampane’s vision and took a huge leap of faith in joining the institution.
“I am not only in a foreign country but a foreign continent, thousands of miles from everything I am familiar with, and I signed this contract for three years … Now it’s sorry, shop is closed,” the emotional academic is heard to say. “What is going to happen to my children? What is my fault really?”
He goes on to argue that “professional conduct” called for the college to buy him out of his contract.
Mampane responds that the termination is due to circumstances beyond his control and that because Elci was still on probation, it was lawful. Although his formal legal obligation was only to give a month’s notice, he had negotiated a severance deal that “at least takes care of you for the next three months and pays you the commitment that we have promised you”.

Boitekanelo’s August 2016 intake plan emphasizes that an increase in student numbers was planned for this year, but adds: “It is in the best interests of the college that it complies with prescribed student-lecture ratios”.
“By reducing student numbers, the college has the option to restructure its expenditure pattern … the best cost reduction can be [by] restructuring the workforce with a view to having a mix of full-time and part-time staff numbers that will significantly reduce the salaries bill,” it says.
Sources at the college also said that Mampane and Elcit had clashed on a number of issues, including the latter’s decision to halt further admissions for the emergency care programme. “He ordered that there should be no further admissions as the programme had enrolled over 800 students. He questioned how they could find work for so many officers, unless the plan was to have one for every household in the country,” said the source.
Mampane dismissed the allegation as “frivolous”, stating that the enrollment was guided by the Botswana Qualifications Authority and Human Resource Development Council.
Elci is also said to have complained about surveillance cameras at the Tlokweng campus lecture halls, alleging that they intimidated staff and students. Mampane’s view was the cameras were a teaching, monitoring and evaluation tools and that they were integrated into the student management system.