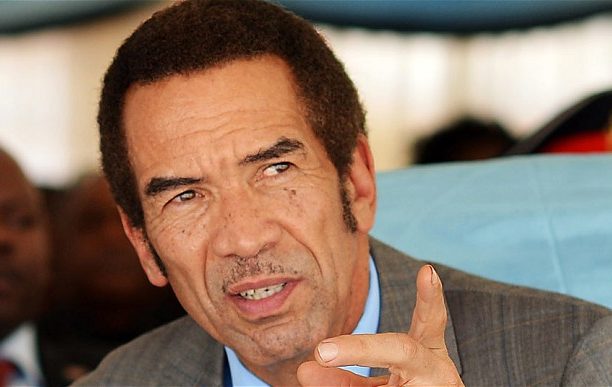 JOURNALISTS IN BOTSWANA WORKING IN ‘PERSISTENT CLIMATE OF FEAR’

“Outsiders have a general perception of Botswana as a free, open, and democratic country. But there has been noticeable regress in freedom of speech and expression under President Ian Khama,” INK Centre for Investigative Journalism’s Managing Partner Joel Konopo tells Pen America.

When people think of democratic countries in Africa, Botswana often comes to mind. Since gaining independence from Britain in 1966, the southern African nation of two million people has achieved great growth and stability. It has done so, mostly, without compromising on human rights. Good governance, combined with vast wealth from its diamond reserves, has made for an African success story. Recently, though, not all has been so rosy—particularly when it comes to press freedom. I interviewed Botswana journalist Joel Konopo via email to find out more. Konopo, former Botswana Guardian editor, is the co-founder of online news site INK, a centre for investigative journalism. He also writes for amaBhungane, the investigative arm of South African newspaper Mail & Guardian.

Bill:What is the current state of media freedom in Botswana?

Konopo: Outsiders have a general perception of Botswana as a free, open, and democratic country. But there has been noticeable regress in freedom of speech and expression under President Ian Khama. Khama views private media in a similar (negative) light as unions and the opposition. The president has often used state resources to divide the private media, particularly through selective advertising. He has gone on record saying that he finds reading newspapers boring. At one point he told the High Level Consultative Council (HLCC)—an annual meeting between government and the private sector—that he intends to establish a fund that will assist senior government officials and ministers to litigate against private media. That is, the use of taxpayer money to fight private litigation on behalf of ministers and government officials.

In recent times, the authorities have targeted Sunday Standard journalists Outsa Mokone and Edgar Tsimane. What is the latest on their situation?

Edgar Tsimane, a reporter with the Sunday Standard who fled Botswana in September 2014, has been granted asylum in South Africa. He fled after his brother, who works for the Botswana intelligence agency, warned him that his life was in danger. Tsimane had written a story about an alleged car accident involving the president. The reporter still occasionally writes for the Sunday Standard from South Africa.

Outsa Mokone, editor of the Sunday Standard, is still facing a charge of sedition. The case is ongoing and he is scheduled to appear in court in September or November 2016. The trial was postponed after Outsa had to attend to a personal matter. Mokone’s transgression was publishing the report by Tsimane about the alleged car accident involving President Ian Khama.

Many local observers expect the government will ultimately yield to human rights lawyers—who view the charge as baseless and without merit. The expectation is that the government will at some point withdraw the matter. Activists have also called on parliament to repeal the Sedition Law on the grounds that it has no place in a democratic society.

Are any journalists currently in jail in Botswana? Or is the pattern one of intimidation and short-term detaining, then release?

In a recent story, on August 8, a cameraman covering a demonstration organized by a group of unemployed graduates in front of the parliament building was detained. Bogosi Raududu from EBotswana allegedly refused to delete a recording of the arrest and beating of demonstrators, and this seemingly led to his detention. He was released without charge after six hours in detention. This is an ongoing trend nowadays in Botswana. Journalists who are simply doing their job become an easy target of police and other authorities. It should also be added that youth unemployment in Botswana currently stands at 35 percent and graduates are severely affected by the poor economic outlook.

But to address the question in more detail, there are no journalists currently in jail in Botswana who have been convicted. The environment is that of intimidation and brief detention. Innocent Selathwa (Botswana Gazette reporter), Shike Olsen (Botswana Gazette managing editor), Sonny Serite (freelance journalist) and Outsa Mokone (Sunday Standard editor) all spent a few days or hours in holding cells. In most cases, the government withdraws the charges on the grounds of insufficient evidence to prosecute. It is only Outsa’s matter that has been protracted. The intimidation is meant to cow journalists and beat them into submission.

Botswana’s reputation as a stable democracy has seemingly been slipping. Why do you think this is happening? Do you think it will get better any time soon?

It is true, Botswana’s clean image as the bastion of democracy has been slipping, particularly under the leadership of the current president. Former president Festus Mogae told the African Leadership Forum in 2014 that Botswana is regressing as a democracy, and that the current crop of leaders are not open to criticism.

One may think that President Khama’s military background has a role to play in him not taking kindly to criticism. Khama was head of Botswana’s armed forces before entering politics. This military mentality could be a possible explanation as to why he reacts angrily to open criticism.

Botswana’s slide away from democracy is unlikely to end any time soon. We are becoming a country that struggles to tolerate open debate. Even within Khama’s own party—the Botswana Democratic Party (BDP)—there is little critical debate. It is yet to be seen whether a new leader can emerge who will be more tolerant.

In May 2015, you wrote the below passage in an article for South African newspaper Mail & Guardian: “There are fears that if the government, with no shortage of funds, sponsors officials to sue media houses that do not have equivalent resources to defend themselves, journalists will be discouraged from criticizing and questioning government decisions. Media houses facing defamation suits end up paying hundreds of thousands of pula in legal fees—even if they win their cases.” Is this currently happening? Is the government using public money to bring a lot of defamation cases against its critics?

It is not happening. When journalists asked government spokesperson Jeff Ramsay about progress on creating a fund to enable officials to sue the private media, he avoided the issue. Ramsay said when the president raised the possibility of such a fund, the head-of-state was making an off-the-cuff remark. Therefore it appears Khama’s pronouncement in 2014 did not become a government policy. We hope it stays this way. Crucially, the law society was again instrumental in criticizing Khama’s announcement.

Despite clamping down on the media, is the government of president Khama still popular? Or, is it popular with some segments of the population and not others?

If you look at the statistics, the ruling BDP’s popular vote has been declining since 1965—from the highs of 85 percent to the current 47 percent. It appears the party is losing popularity, especially in the urban and peri-urban areas were unemployment remains high.

Of the main newspapers in Botswana, which one is the most reliable?

The Sunday Standard was established in 2003/04 and has become popular among elites and professionals for its relatively fearless reporting. This is largely a result of the newspaper’s ownership structure. It is owned by practicing journalists, and has Outsa Mokone as its editor.

I can’t say the same about Mmegi and Botswana Guardian newspapers. These publications have been losing editors on a frequent basis, and its ownership—Mmegi/Guardian group—is associated with some businesspeople whose interest in a free press is questionable.

The Botswana Gazette, a mid-week newspaper covering politics and breaking news, has the reputation of being a competitive publication because of its interest in investigative reporting.

“Botswana’s journalists and human rights activists now operate in a persistent climate of fear.” You wrote this in May 2015. Is this still the case? Has it got better or worse?

It remains the same. Charges against freelance journalist Sonny Serite—and his subsequent arrest—were merely trumped up. Serite is known for his reporting on corruption.

The relationship between the private media and government is tense, particularly under the current threat of advertising bans—which the government denies. Most newspapers have scaled down production and some publications are letting go of freelance columnists. Editors of smaller newspapers are increasingly resorting to multi-tasking: copy editing, reporting, etc. A climate of self-censorship is growing among the newspapers in order to retain favor with the government, and therefore remain viable. In such an environment, where the press is heavily reliant on government advertising revenue, it leaves individual newspapers with few options.

You are the managing partner and co-founder of INK, an online investigative news publication. What do you want people to know about INK? And finally, as the traditional media is becoming more muzzled, how important is online news in Botswana?

INK was established in 2015 to help develop investigative journalism, and to enable the public to monitor those in power. The site is the brainchild of former editors who understand the importance of addressing resource constraints in newsrooms. Because it is nonprofit and non-partisan, INK is arguably the best model in a country that uses advertising to suppress alternative views. There is growing evidence of the penetration of mobile news thanks to the explosion in smart phones, particularly among the youth. Online news, especially via social media, with its emphasis on citizen journalism will in the near future become the true alternative to traditional sources of media.