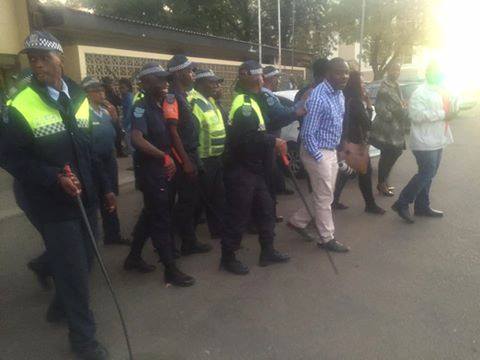 A squad of police officers seen here arresting President of journalists's union, Phillimon Mmeso on Monday. More than 10 journalists have been arrested since 2014 in what observes say highlights president Khama clampdown on the private media [picture: Breakfast with Reg Facebook page]

With another journalist detained and later released without a charge, it appears Botswana’s intolerance for private press is becoming a dangerous obsession.

E-Botswana cameraman, Bogosi Raududu – who was covering a peaceful demonstration by unemployed youth picketing at the parliament buildings – was arrested on Monday after he resisted a police request to erase footage showing police brutality against unarmed and non-violent demonstrators. This brings to eight the number of journalists that have been arrested or threatened by security agents over the past two years.
Raududu’s arrest was unlawful and unhelpful. Once again, it highlights the direction in which President Ian Khama wants to take Botswana in terms of treatment of the independent press.

For more than five years, Botswana has maintained a lofty position in the Ibrahim Index of African governments. But for Raududu and other journalists who have suffered at the hands of the police, the favorable ratings have not translated into human rights gains.Other surveys paint a different picture. Freedom House now rates the country as partly free, a significant downgrading compared to previous rankings. Freedom House noted a growing climate of suspicion that has dampened private discussion, as well as increasing electronic surveillance, rogue intelligence agents and “lack of proper oversight mechanisms for spy agencies”.
It appears that Africa’s shining example of democracy is increasingly booking a lofty position as one of SADC’s most frequent jailer of journalists.
The INK Centre for Investigative Journalism is deeply disturbed by the increasing detention and arrest of journalists on vague charges and the subsequent withdrawal of charges against them. This not only violates the principle of freedom of expression – it also risks worsening an already adversarial relationship between the government and the private media.
Raududu’s arrest comes barely five months after Botswana’s intelligence agency, the Directorate on Intelligence and Security Services (DISS), arrested freelance journalist Sonny Serite for obtaining documents allegedly containing “state secrets”. Serite was discharged after weeks of being held after prosecutors decided there were no grounds for prosecution.

In 2015, three Botswana Gazette journalists, Innocent Selatlhwa, Shike Olsen and Lawrence Seretse, were arrested by the country’s corruption watchdog, the Directorate on Corruption and Economic Crime (DCEC), for allegedly violating the draconian section 44 of the Corruption and Economic Crime Act, which prohibits anyone from divulging information on an ongoing DCEC investigation.
In the same year, another freelance journalist, Daniel Kenosi, was charged for allegedly violating the little-used Cyber Crime Act after he posted on his Facebook page that a government minister was involved in a sex scandal.
These incidents are not isolated. In 2014, Sunday Standard editor, Outsa Mokone, had a sedition charge slapped on him, sparking a diplomatic row with the United States and forcing one of the newspaper’s journalists, Edgar Tsimane, to flee to South Africa saying that he feared for his life. The Sunday Standard had reported that President Ian Khama was involved in an accident at night caused by speeding. In the same year, the Sunday Standard was raided by the DISS after an expose on corruption allegations against DISS Head, Isaac Kgosi. Protestors and journalists faced the wrath of the police during the protests by the #uneploymentmovement recently (Pics:Breakfast with Reg on Facebook]

The fact is that Botswana is not a firm supporter of press freedom – the ruling Botswana Democratic Party (BDP) has repeatedly used its majority in parliament to promote laws that criminalise normal journalistic practice. Last week it abused its majority to reject a parliamentary motion by an opposition MP calling for the inclusion of journalists on a list of “resource persons” whistle-blowers to be allowed to disclose to journalists as resource persons information under the Act which had not been followed up by the relevant authorities can reach out to when they want to expose those whose actions harm the public interest. Debating the motion, education minister and former High Court judge, Unity Dow, said journalists are irresponsible cannot be included on the list. A position formally espoused by Minister of Foreign Affairs and African Union hopeful, Venson Moitoi when rebuking the private the private media when denying that China had temporarily closed its embassy in Gaborone over Botswana position against China in the disputed South China Sea.
Media freedom in Botswana has been further restricted by regulatory disputes and a surreptitious government ban on advertising in the private media.
The thinking in state circles, especially among senior police officers, is that the private media should be punished. The instinct of the powerful is often to stifle the dissemination of uncomfortable information.
So when senior police officers attempted to force Raududu to erase footage of a police crackdown on non-violent demonstrators, they were merely doing President Khama’s bidding. He has been openly hostile towards “unpatriotic” private journalists. INK supports Raududu’s refusal to surrender to official censorship. We condemn both his arrest and the general harassment of journalists in Botswana We call on the police to engage in an open and balanced discussion about how they can behave respectfully towards the private press as a true watchdog that promotes and serves democracy.

INK also sympathises with the protest by young job-seekers whose protest Raududu recorded. These youngsters have been pushed to the brink by a soaring unemployment rate, poverty and hopelessness. At least four out of every ten youths in Botswana are unemployed. They are demanding that legislators get serious about job creation and introduce meaningful schemes that will replace President Khama’s populist programmes, such as the Graduate Volunteer Scheme, Ipelegeng and Internship Scheme. Their protests should be dealt with in the spirit of tolerance and not trivialized, as the police did on Monday.
Youth unemployment has become a political and economic emergency, yet politicians on the gravy train are obsessed with the frivolous issue of the increase in Specially Elected MPs, a move that will push up the parliamentary wage bill by an additional P8 million if the legislation goes through. It is easy to understand the frustration of our youth.
Compounding the problem is the disdain of senior police officers for public gatherings, an issue that has previously led to court battles. Unemployed youths, like every other citizen, have a right to seek audience with the people they voted into public office. What better way to do communicate their displeasure than to do it where the legislature sits!