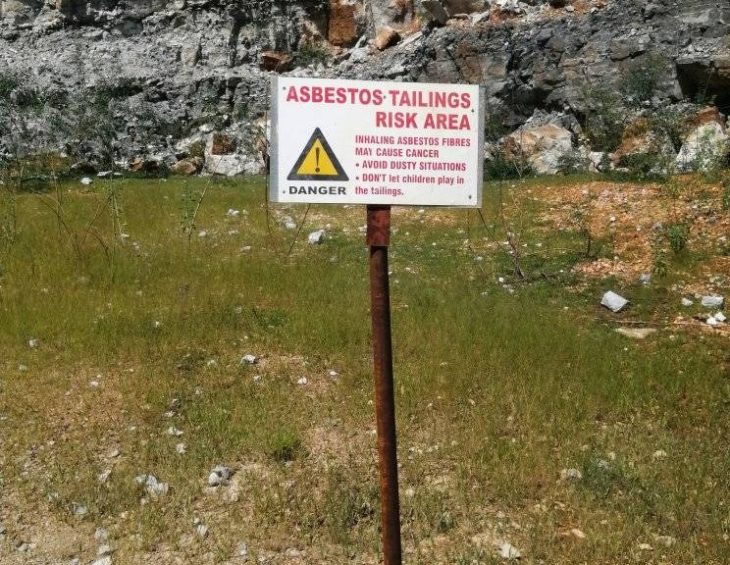 Fresh photographic evidence by this publication reveals that miners and villagers are not safe from the dangers associated with exposure to the asbestos mineral, which is currently banned since it causes lung diseases.

This is despite the mining company at the mine claiming to uphold safety and health standards and the ministry of mines assuring that it carries out inspections.

Moshaneng Quarry was set up in the 1970s as one of the Kanye village development ventures for the purpose of mining quarry or cement. It later produced big rocks which would be crushed into concrete and used for building roads and houses.

However, trouble started when the miners discovered the heat resistant fibrous silicate mineral called asbestos which was proved to damage lungs.

The mineral was at that time used interchangeably in the making of bricks and other building products before it was banned by government as it produces dust that goes on to damage lungs when inhaled.

At that time Workers suffered from a disease called mesothelioma and other lung diseases as they complained about chest pains and coughed a lot.

Investigations of the mine by this publication shows that the asbestos was buried down in the ground with the old mine and the new miner who uses open shaft should avoid getting in contact with the underground minerals.

However, photographic evidence shows that there was a breach in 2018 as some areas show that the pit was over-dug thereby causing a possible exposure to the asbestos.

A former employee and foreman at the mine Anthony Ntlape told this publication that workers have been working at the risk of danger to exposure to asbestos despite government’s assurances that it carries out inspections at the quarry.

He said there are times when they were made to break stones or crush them without water, which helps to reduce dust. Ntlape started working in the mine for a company called Fastrack in 2001 and resigned in 2020.

“The inspections from the ministry of minerals came sparingly. The mining activities and search for quality rock caused the mine to go deeper. This led to the open shaft mine being dug deeper even exposing the old underground mine which had asbestos,” Ntlape said.

When he was foreman at the mine, Ntlape observed that the mining of asbestos may be accidental or intentional. This is because it is cheaper to extract the mineral compared to mining stronger stones which is expensive because it extracting these hard stones requires high quality crushers.

Ntlape said the current company uses fragile machinery which explains why it prefers the easy to crush asbestos.

A current employee at the mine who could not be named for fear of being victimized told this publication that they always mine a lot of stones. He said there is normally too much dust which often affects their breathing.

“What I see in the mine is that the asbestos was buried a long time ago. It seems now we are getting deeper and sometimes contact very dusty stones which are obviously the banned asbestos. There are times our supervisors tell us where to stop, but most times we are allowed to mine,” said the worker.

The worker saw the inspectors from the minerals ministry once this year. Mostly, as workers, he said they complain about protective clothing. He also decried the company’s less regard for safety practices and the low wages it pays.

Our investigations showed that villagers and the quarry workers do not know asbestos and most of them are not aware of its adverse health impact.

“I heard years ago that those stones cause lung diseases or tuberculosis. Our grandparents who worked at the mines are suffering from the impact of asbestos according to health experts,” Kabo Mosinyi, a young villager, said.

Richard Basele from Kanye normally buys concrete from Moshaneng Quarry and makes bricks for selling. But he cannot tell how asbestos looks like. He knows and has heard of its health impact from the internet and people in the village.

A young villager who is more knowledgeable on asbestos Thabang Thubanyane said they used to go to the mine to fetch asbestos until it was banned in the early 2000s.

Thubanyane said they have seen their grandparents die from diseases related to lung damages over the years. He also saw deposits of asbestos at the mine when he visited it.

“We have seen the company encroaching even out of its border fence and reaching out of its area in a desperate search for asbestos. Evidently, the company would even dig deeper hence getting into contact with asbestos”.

Mopatiki Bathobasele worked in the mine in the 80s and knows about the impact of asbestos as he currently has symptoms of lung disease.

“We used to mine everything until we were told back in the years that mining asbestos is not good for our health. A lot of my colleagues at te time lost their lives after contracting lung diseases for almost 20 to 30 years,” said Bathobasele.

In 2018 the Ministry of Mineral Resources, Green Technology and Energy Security shut down Moshaneng Quarry after inspections showed that it was mining the banned asbestos stones.

The Minister of Mineral Resources, Green Technology and Energy Security Lefoko Moagi also confirmed this before Parliament in November 2019.

He told Parliament that the quarry operations were suspended for them to rectify the environmental issues associated with asbestos that were intercepted at the time.

The owner of Moshaneng Quarry Raven Wang referred our inquiries to his manager Emmanuel Motlhabane who dismissed the issue of asbestos being illegally mined as “village talk.”

“We are constantly assessed and inspected by the mines department. We also do not have any cases of employees having lung infection. We always go for medical tests and the next test is in May this year,” Motlhabane said.

Motlhabane added that villagers always complain of the noise caused by blasting as the mine is in the middle of the village. He said villagers also complain of dust which comes from the mine. However, He said the dust is not from asbestos.

The Moshaneng Quarry foreman said that most of the time workers complain about protective clothing and wages and not about being exposed to asbestos or any health hazard.

In a brief interview with this publication Minister Moagi said he is not aware of the latest claims of exposure to asbestos by the villagers and quarry workers.

He said he will go on the ground to confirm with his officials if this is indeed happening. However, the Minister never got back to us after that promise.

Back in 2019 Minister Moagi had assured Parliament that the Department of Mines regularly inspects the quarry to ensure it complies with the approved environmental management plans, and relevant mining legislation.

“The environmental concerns from the Moshana quarry are mostly noise, dust pollution and risk to exposure to asbestos, as the quarry is adjacent to an old asbestos mine.

“The study commissioned by the quarry advised the management on areas to mine to minimize contact with asbestos mineralisation, which is a major health hazard.

“After the life of the operation, the quarry will be rehabilitated to ensure that the area is safe and is left in a good environmental state to carry out periodic inspections on any adverse effects that could be to people or to the environment,” Moagi told Parliament.