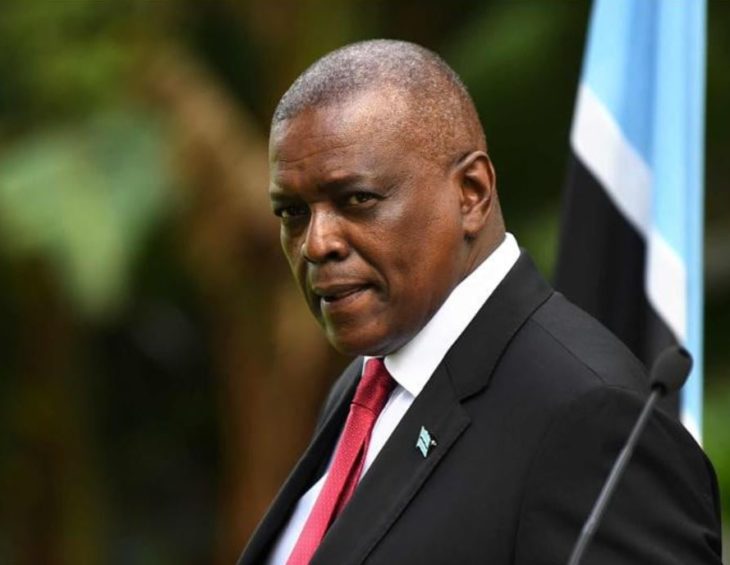 Masisi’s Pandora Box and his most wanted man shut inside

For almost four years former president Ian Khama and his specially handpicked successor, Mokgweetsi Masisi have been trying to settle a score in an ego trail or a power play which evidently emanated from a two-man Gentleman’s Agreement gone wrong.

Masisi fought hard against his mentor, Khama who in his side did not relent, throwing all sorts of missiles against him. After many botched attempts to take Khama down, now a tangible claim which could have been the reason that led the former president to flee this country has emerged.

According to allegations, it is the arms he acquired for himself illegally as alleged by Masisi’s men. A marathon raid for guns ensued at Khama and his associates’ properties in a quest led by none other than Khama’s former junior at the barracks Peter Magosi who he fired years ago as president.

The matter has now reached the Broadhurst Magistrate Court as Masisi’s men now walk with chests out claiming to have a case they have long wanted.

But this does not spare Masisi a can of worms. While he is in power, the incumbent is taking on not an ordinary man, but a man of influence with support even internationally.

Masisi is taking Khama and is all high profile co-accused on with 51 charges which are related to illegal possession of firearms.

Former state intelligence boss Isaac Kgosi tops the charge sheet followed by Khama while chief police officer Keabetswe Makgophe and former top police official and corruption busting unit director Victor Paledi, are said to have aided the two men in acquiring and keeping the arms while they were not properly registered or owned.

This case will be one of the biggest to ever reach Botswana’s courts; a former president fighting against probable imprisonment.

Borrowing from the Greek mythology; a beauty Pandora opened a box and in it came out all the troubles and misery that befell mankind. In this box however remained one thing that Pandora managed to salvage, Hope.

Masisi’s taking on his mentor came out with all the troubles and now he hopes on the arms charges and is willing to put Khama on the stand and eventually send him to jail.

Khama once alleged that there are attempts to assassinate him after the claim that he had siphoned P100 billion from the county, which claim the ex-leader refuted and called the current regime’s bluff publicly.

The former president also challenged attempts to search him during a spirited arms raid by state intelligence agents subsequently winning a case in court with the verdict vindicating his harassment by the state.

But the state never relented. The Spirit of Hope in Masisi’s Pandora Box kept on burning until the arms were said to have been confiscated with a subsequent arrest of a top cop.

This is a first of its kind in the once paragon of law and order, the once touted jewel of democracy that a police commissioner is arrested for serious criminal charges involving arms dealing.

As if this was not enough, the police commissioner is said to have been working in cahoots with Khama’s long-time right hand man, Isaac Kgosi whom he handpicked when forming the state spy unit.

Such things were only heard of in the always-volatile political environment of neighboring South Africa where Khama is currently staying.

A former president in that country was jailed leading to protests which tried to counter his imprisonment. Years ago, a police commissioner was arrested for corruption and there has been a trend of top police chiefs being fired in South Africa.

This trend and political trajectory now seems to have descended north of South African borders.

To those close to him, Masisi is a man who thrives in and braves upon drama. But this time he seems to have been calculating what is in his Pandora Box, according to observers.

In a widely-broadcast clip which was refuted by the BDP then, a voice supposed to be that of Masisi promised those he was recruiting to the BDP before the 2019 general elections that he will be president and Khama will go down, something which was ignored by the former president.

But he lived to his promise as he started by firing Kgosi, subsequently he purged out anyone or anything that brought Khama comfort and refuge leaving his once-powerful mentor vulnerable.

Kgosi was replaced with Magosi, a Masisi man in the quest to brave out his Pandora Box. But what people never took notice of, is the alleged possible firing of Makgophe which has been making the rounds for three years.

No one knew he was part of Masisi’s arms fight with Khama until a few weeks ago when he was arrested.

In 20 August 2020 many overlooked another Masisi plan; he wrote Makgophe’s professional obituary and appointed his replacement, the acting police commissioner, Phemelo Ramakorwane.

Sources inside government allege that he is one of “Masisi’s guys.” Masisi could have prepared Makgophe’s substitute knowing well he will fire him for arms and ammunition charges. Makgophe is said to have allowed his former master, Khama to own war apparatus illegally.

The general observation is that Masisi is a man who will do anything for political acceptance. During the 2019 campaign, he would make big promises much to the admiration of many, even those who had despised the BDP for ages.

His wit and political charisma, gave him a following. But against Khama, he was against a man of the people and the popularity contest was always won by the master over his protégé.

Maybe there is one big promise that Masisi has made himself which he is willing to fulfill; putting Khama in jail. He has spirited this against all the international scrutiny and possible domestic civil unrest.

Now with the Pandora box at his disposal, Masisi is braving a possible diplomatic tension with neighboring South Africa.

Khama has political influence and wealthy friends in South Africa and is not an ordinary man to just be extradited in order to face criminal charges which he rubbished while sojourning in South Africa.

Some believe his sojourn to South Africa was to flee the charges while others say he was seeking asylum against political harassment.

In June 6, 2022, Khama is expected to appear before a magistrate court and many are already speculating about his absence at the Thursday appearance of this high level case.