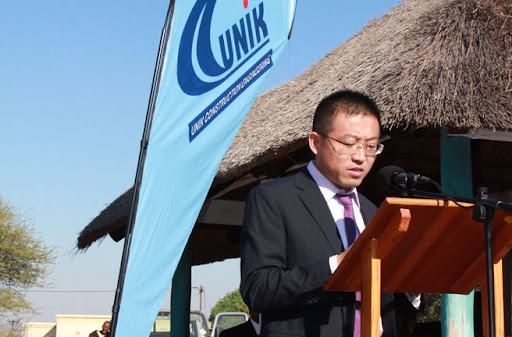 How blacklisted Unik Construction gobbled P268 million from the treasury

Dust falls out of the Dubois’ letter when it emerges that for the two years when the internationally reputable institution World Bank suspended Unik Construction, Botswana government still favored the Chinese contractor for two tenders amounting to P268 million.

“…The Respondent(Unik Constructions) engaged in a fraudulent practice in connection with its prequalification application for a Bank-financed road construction contract by submitting forged corporate experience documents,” Dubois stated in 2013.

But Unik Construction was not fazed as the same period it was blacklisted for two years, it managed to successfully bid for two tenders in Botswana.

Unik Construction was blacklisted for defrauding Botswana government and World Bank in a road construction tender which was funded by the Bank.

Selibe Phikwe West legislator Dithapelo Keorapetse had to ask finance minister Peggy Serame of government’s negligence of a Bretton Woods’ institution which is internationally reputable and big governments funder advice and red-flagging of that time.

Serame confirmed to Parliament recently that Unik Construction Engineering was blacklisted for a period of two years commencing on 4th October 2013 to 3rd October 2015.

“The contractor was listed by the World Bank for providing incorrect and falsified information regarding its prior construction experience relating to projects executed in Botswana when participating in a World Bank funded project in Uganda,” she confirmed.

Serame went on to admit government’s negligence that it gave Unik Construction a tender for the construction of the Road-over-Rail Bridge and Access Road to Tshele Hills on the 2nd of October 2014 for P130 million even though it was blacklisted by the World Bank. The tender took one and a half year.

Serame however omitted another tender which was awarded in February 2015 for construction of Seronga-Gudigwa Rural Villages Water Supply Project at a tune of P137 million during World Bank’s suspension.

The World Bank suspension was to be lifted in October the same year that the tender was awarded and Unik Construction was busy with the works for two years and finished late in 2017.

It is not clear or was never mentioned whether Unik Construction took its time to comply with World Bank as records show it has always been business as usual as they continued to bid for government tenders throughout the suspension.

The current finance minister’s justification of government awarding tenders to blacklisted companies was that the authority that gave away the tenders, the PPADB Act, has loopholes and was short armed legally to stop any works.

“The PPAD Act at that time and still today does not provide a legal basis to deny award of tenders to such firms,” Serame told Parliament.

Serame explained that the time that the ministry became aware of the Unik Construction matter, the PPADB engaged her Ministry and all relevant stakeholders with a view to taking action.

“However, even though preliminary disciplinary proceedings were initiated against the contractor, they could not be sustained due to the aforesaid gap in the law,” she said.

Unik Construction which was incorporated in Botswana in 1996 faced the World Bank sanctions in 2004 and 2006. Serame said her ministry and other stakeholders are dogged by the lacuna in the PPAD Act for a requirement to deny award of tenders to companies debarred by internationally-recognized regulatory bodies.

Serame also said this has resulted in the incorporation of such requirement in the PPADB Bill which was recently passed by Parliament.

From 2014 to 2018 Unik Construction won five government tenders at a value of P1 billion. The Chinese company paid VAT of P112 million in those four years. Unik Construction offices phone rang unanswered or directors were never available for comment even during working hours.

According to Serame the debarment was as a result of submitting in its bid a falsified contract agreement with a falsified construction period and inflated contract value in order to meet the requirements in the bidding process.

“However the debarment has since been lifted, explaining their exclusion from the list. Zhengtai Group Co. Ltd was also not awarded any tenders at the time that they were debarred by the World Bank,” said the finance minister.

Zhengtai Group is the biggest beneficiaries of state-funded contracts in all foreign companies as it has been awarded four tenders for projects valued at P3 billion from 2013 to 2019, paying VAT of P404 million.