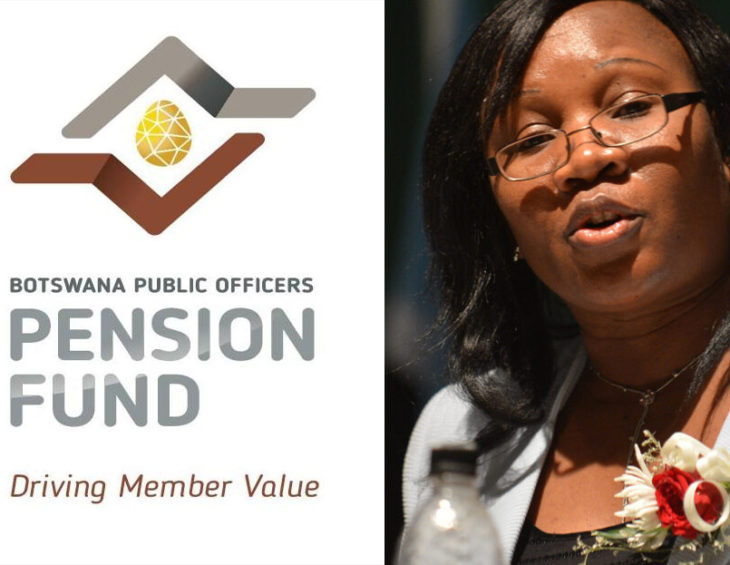 Emmah Peloetletse, acting Permanent Secretary to the President (PSP), allegedly promised an investment management firm her full support in their bid to increase their exposure to the country’s largest pension fund, allegedly in exchange for kickbacks.

In August 2014, Capital Management Botswana (CMB) won a tender to manage P500-million on behalf of the Botswana Public Officers Pensions Fund (BPOPF). In December 2016, the firm unsuccessfully sought to increase its portfolio to P1.1-billion, but needed backing from the Board of Trustees. Now, CMB is being sued by BPOPF for mismanaging the funds.

Peloetletse sat on the BPOPF Board as the government trustee representative. She also chairs the powerful Finance and Investment Committee, which appoints the fund managers that manage the USD6-billion pension fund assets.

According to well-placed sources, in April 2017 Peloetletse and her husband allegedly received air tickets and luxury accommodation to the prestigious Cape Town Jazz Festival worth more than R98,000 (approximately P73,000) from CMB without the knowledge of other Trustees and BPOPF management. The trip was allegedly not approved by BPOPF.

Other beneficiaries of the luxury trip allegedly included former CEO of Fleming Asset Management Botswana, Moitseki “Checks” Lekalake and his girlfriend, two people from the Botswana Public Employees Union (BOPEU) and two undisclosed individuals. Lekalake allegedly had a beneficial relationship with CMB through Varsity League, a little-known firm which was paid P3-million from CMB for unknown reasons

In line with anti-corruption international best practice, BPOPF policies prohibit Trustees from accepting gifts and invitations to “hospitality events” from stakeholders and clients in order to protect the transparency and integrity of the Fund.

In 2019, Peloetletse was kicked off the BPOPF Board of Trustees after it emerged that she was under investigation in connection with the trip. In court papers filed by BPOPF, they accuse CMB of mismanagement of funds.

Three months after the Cape Town trip, CMB requested the BPOPF Board to consider an increase in their exposure to P1.1 billion. The asset management firm was allegedly banking on Peloetletse to influence the decision in the investment committee. However, BPOPF declined their application based on an argument that their pipe line for expansion of the investment was unconvincing. The committee was also concerned that CMB had invested more than 80 percent of the P500-million already allocated to them without providing evidence of return on investment.

At the stage, sources say Peloetletse had become a vocal supporter of CMB’s quest to double its portfolio.

“She asked management under what circumstances can they get them more money,” said the source. “It appears they had discussed this [in Cape Town and she had promised them more money]. There was no good reason,” a source revealed.

It was only after an Advisory Committee Board made a resolution did CMB get P380 million.

BPOPF governance rules requires all Trustees to sign an annual declaration of interest, according to Chief Executive Officer, Moemedi Malindah. He declined to say whether Peloetletse had declared her CMB sponsored trip to Cape Town to the Board saying the matter was under investigation.

A former Trustee who did not want to be identified said: “Some asset managers will not waste an opportunity to incentivize Trustees,”

How will the investigation end?

In a letter dated 17June 2019 to the BPOPF Board Chair Solomon Mantswe, which INK Centre has seen, Peloetletse pre-empted the investigation  saying that accepting an invitation from stakeholders was common. This claim was disputed by fellow Trustees and the Fund’s Gift and Entertainment Policy, which expressly prohibits such behaviour. INK Centre sent a question to the acting PSP and Peloetletse had not responded after two weeks.

INK Centre understands from another well-placed source that the Peloetletse case has been delayed by the DCEC because intelligence operatives at the Directorate of Intelligence Services argue that if she is not prosecuted, her cooperation could add weight to a broader probe into whether former President Khama diverted P100 billion to offshore accounts for personal gain. The DCEC said it will not respond to questions on CMB and Peloetletse. The office of the Accountant General, under the Ministry of Finance, deals with recurrent expenditure, government revenue and development budget.

“[The] Peloetletse case was stopped by [Brigadier Peter] Magosi because he felt that she would antagonise the P100 billion case,” said the source. Magosi declined to comment.

President Mokgweetsi Masisi promoted Peloetletse, while she was under investigation, from the relatively obscure position of Accountant General to become deputy Permanent Secretary in the Office of the President.

The DCEC Director General reports to the Permanent Secretary to the President (PSP). Peloetletse is said to have a close relationship with President Masisi and former cabinet minister, Thapelo Olopeng. During his campaign for party chairmanship, Masisi was allegedly in the care of the Peloetletse family in Tonota. Other people facing corruption charges related to the BPOPF and CMB have been discharged. Reached for comment, the DCEC said it is constrained to respond as the “CMB case is under investigation.”