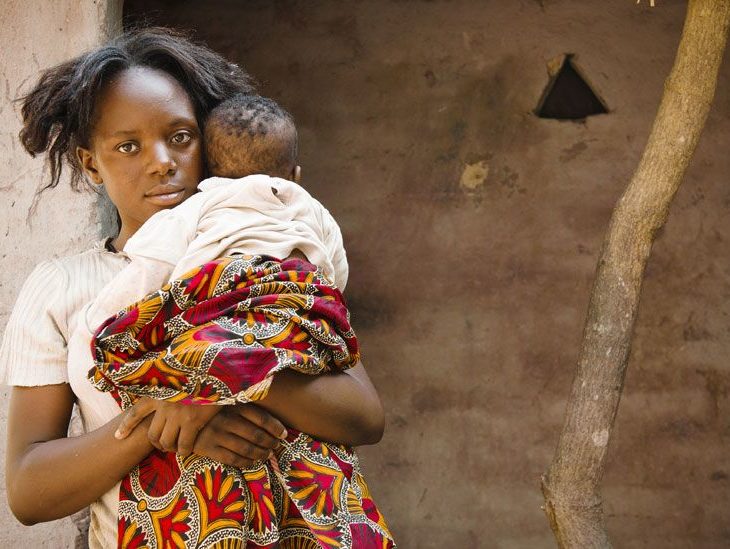 Ragele Karosa* (16) of Ngami Junior Secondary School has a passion for success. She values school more so because she has dropped out twice due to pregnancy. Her premature motherhood has become a financial burden to her unemployed parents who were already struggling to make ends meet. The youngster says that she regrets her pregnancies because they have cemented her parents’ belief that by now she should be a wife. Now, the Herero born student of Semboyo village in Ngamiland fears that she will soon be forced to become a child bride.

“They have had enough with me for having children out of wedlock. It is highly possible that these are my last few months in school,” she says.

Her family has kept it under wraps that they had in fact orchestrated the said pregnancies. The Matron at her school Boitumelo Mosinyi revealed to INK Centre that the children were in fact a result of a previous arranged marriage gone wrong. “She had her first child when she was in Standard 6 and her second when she was in Form 1 by an older man that her parents wanted her to marry then,” she said.

Such incidences are routinely covered up in remote areas in Botswana, according to Mosinyi, who said authorities’ hand are tied when parents do not cooperate.

The Penal Code provides that sexual intercourse with a child under the age of 18 years old constitutes an offence.

“They treat their girl children as mere commodities that they can use to cash in,” she said.

There is little Karosa can do to escape the nightmare that awaits her.  Her parents are once again encouraging her to leave school to marry a man three times her age. She has relied on the Guidance and Counselling Department at her school to intervene. She is currently in Form 3 and there is a high chance she will not proceed with her studies regardless of how well she performs in her year-end exams.

Her grades have since plummeted. Her parents have already begun making arrangements for the impending marriage.

“They picked some 48-year-old man for me. I am not ready for marriage. I need to finish school but my parents are simply not going to allow me,” says the anxious teen.

Her fiancé has demanded that Karosa become a housewife, diminishing her dreams of becoming a pilot. The situation is made more desperate by the two years of schooling the young mother lost while she cared for her babies. “It is very hard to look after my children because I am a student and my family is too poor to afford a nanny. At the moment I depend on the social worker for food and toiletries for my children as well as handouts from fellow church members. I see education as the only ticket out of the poverty we are in, not a husband,” she said.

The father of her children is nowhere to be found. “Ragele told me that her parents have since received goats from the man that got her pregnant and that was the last they saw of him,” Mosinyi said.

Mosinyi further stated that the school is however fully committed to ensuring that girls like Karosa remain in class and that is about as far the intervention goes. “In the event that her parents stop her from going on to Form Four we will be the first to know and intervene. We had four such students last year who did not go to senior secondary school because their parents married them off. We were able to rescue them and as we speak they are back in school,” she said. Mosinyi admits that it is difficult to tackle a case of defilement in which the victim’s parents have played a part. In this instant the last place the parents want to go is the police station as they stand to benefit from marrying her off. Therefore the girl is trapped.”

Meanwhile Karosa’s parents who live 35 kilometers away from the boarding school she attends do not support her dream of a career in aviation. Her father, Humphrey Karosa blames his daughter of “sleeping around” with boys at school.

“The man has promised to take over looking after her and the children she keeps dropping out of school to have,” he said in and interview, blaming his daughter of embarrassing the family.

“The only thing that can redeem her is marriage as it will restore her dignity and ours.”

Karosa feels her re-entry into school is a second chance to make the best of her life. “I learnt my lesson. I was very depressed when I dropped out of school due to the pregnancies. It was a huge relief to be back in school until 3 months ago when I found out that I’m in line for marriage. My parents are setting me back emotionally and the set back is evident in my grades,” she said.

While child marriage has been known to have links with human trafficking and modern slavery, a lack of awareness around the issue still remains in many communities around the world. According to global advocacy agency Girls Not Brides, child marriages can be considered as modern slavery if the child shows no informed consent or free will to marry, if the child is under control or being treated as property for her husband to exploit, or if the child is unable to voluntarily leave the marriage. In Karosa’s case, it is unclear if her future husband will expect labour from her – in the form of domestic work – or exploit her in other ways during the marriage. But the young girl has shown that she is not willing to enter into the marriage, revoking any consent to become a bride.

The distraught teenager told INK Centre that a recent weekend visit to her parents’ home had brought her nightmare to life. “My mother showed me a wedding dress that she bought for me and told me that the family has received my lobola (bride price). My wedding date is set for the week after my Junior Certificate Final Exams at the end of the year. If I get married I will not be able to proceed to Form Four,” says a worried Karosa.

Although there are many girls who are victimized like Karosa, the police seldom catch wind of it owing to the secrecy and deeply rooted cultural traditions of child marriage. Station Commander at Sehithwa Police Station Nshaki Mabopiwa said there are no cases involving child marriages on his desk.

Project Officer at Botswana Network on Ethics, Law and HIV/AIDS (BONELA) Arnold Sokwa also confirmed that Karosa’s case is not a rarity, saying his office is dealing with 3 child marriage cases at the same school. “We largely depend on tip offs because the girls themselves are afraid of reporting. The wedding ceremonies also become the families’ best kept secret. They normally have the ceremonies during public holidays and only immediate family attends,” he said. “We however step in as civil society as early as possible with legal representation and counselling. We also support the victim to bring the perpetrator to book.”

Nevertheless in 2019 United Nations Population Fund (UNPF) made a staggering discovery: 5392 girls in Botswana were found to be trapped in either marriage or cohabitation with significantly older men and were consequently taken out of school. “1,644 children were found to be in marriage relationships while 3,748 were living in cohabitation,” reads the report.

It is feared that in 2021 the numbers might be higher as there has not been much intervention since the report was published. The report was however released the year after Botswana passed a law to increase the legal age of consent from 16 to 18 years. Such a law was expected to address incidences of defilement, abuse of children, abductions, indecent assault and kidnapping of children among others but not much has changed as Botswana’s children remain vulnerable to all of the above.

Furthermore, although the same report did not name Ngamiland as the problem district, local media reports continue to do so. Unfortunately the practice of child marriage feeds an unwelcome patriarchal belief system that continues to benefit the boys and disempower the girls. “It is a culture that is still upheld by pockets of Botswana and in Ngami it is by and large practiced within the Herero tribe. Such arrangements happen behind closed doors and the girls are trapped because it becomes a well-kept secret,” explained Sehithwa Chief of Arbitration Dumi Kandu. The troubled chief had invited Ink to a consultative meeting with headmen and other village leadership of neighboring Semboyo, Sankuyo, Shorobe and Toteng villages. The issue of child marriages took center stage at the gathering.

For Karosa, these interventions may be too little, too late. While her school is attempting to protect her, the youngster has begun to contemplate suicide, fearful that she will never escape her parents’ plans for an impending marriage.

“I do not know what to live for. My life is a mess and my future is crumbling in my face,” she cried. “It seems the nightmare is far from over,” said a frightened Karosa.

Note: The names in this story have been changed to protect sources. This story was produced by INK Centre for Investigative Journalism in collaboration with Code for Africa