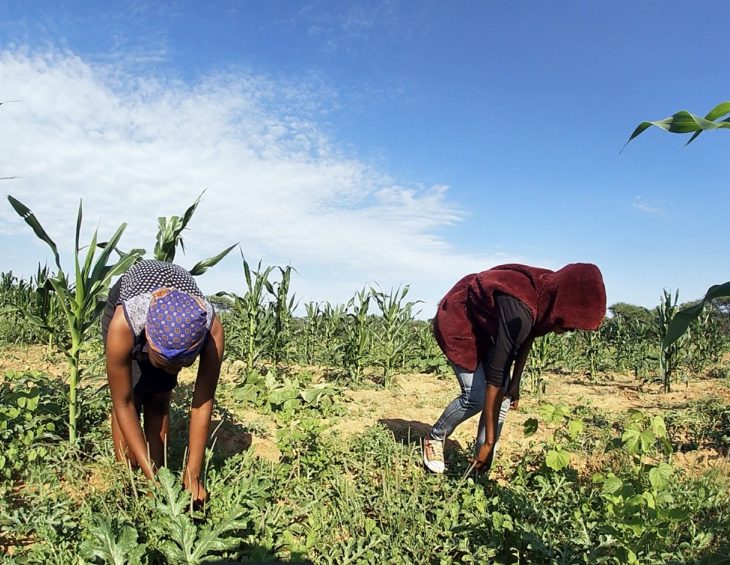 No escape for trafficked Mogobane girls

Fifteen-year-old Lesedi Mmopi and her 16 year old sister Grace Mmopi have been waking up at 4.30 am every morning. Instead of rising early to prepare for school, the youngsters have been forced into a different world.

They live in  Mogobane, a picturesque village nestled behind the peak of the majestic Baratani Hill  a 45 kilometer drive from the capital Gaborone. In this small village, local farms have been thriving as a result of a strong rainy season. But the Mmopi sisters have seen a different side to this pretty village and its successful farms. A stranger came into their home and offered them a new beginning on a bountiful farm. But the two girls soon realised they had been tricked into a life of child labour.

The sisters are fearful. They watch over their shoulder anxiously for any sign of their boss. The teenage girls were brought over 100 kilometers away from their home in Tshwaane to work on the farm owned by their new boss. He promised their parents that they would be well taken care of at the farm. Excited by the new opportunity the girls hopped on the strange man’s truck relieved that their jobless days were over.

Desperate to supplement their father’s old age pension which has been the family’s sole income, the girls agreed to work daily for P200.00 (less than $20) each per month. They were ready to get out and take care of their parents who struggle to make ends meet. But they never expected what was to come. “We were never prepared for this, it is just too much,” says Lesedi. The reality has hit the girls hard: duped into believing that they would be able to help their parents, they have instead found themselves victims of child labour  trafficking.

Under the watchful eye of their boss, the girls  work every day, only breaking for 1 hour 30 minutes. They work a 12-hour day and have no stipulated off days. By March, they had already worked for more than 30 day without reprieve.  At meal times, they have only water and no food.

Inside the farm, there is a tiny termite infested room with no furniture or essential human comforts. It is where the sisters call home. They have spent sleepless nights fearing the possibility of snakes entering the room through the broken makeshift door or smashed window. “We sleep on the floor as there is no mattress on the bed that we are supposed to sleep on,” said the elder sister.

A bucket of pap powder is filled with worms. The sisters will have nothing to eat today.

On discovering that they had been lied to, the two girls attempted an escape back home to Tshwaane, a settlement not too far from Moshopa village. “When we got home our parents sent us packing again so we are back here again,” said Grace. They do not know where to turn to for help.

February has come and gone but the sisters have not yet been given their wages for the month. “We have not yet been paid,” confirmed the older sister. With no protective gear like hats to protect them from the blazing daytime heat, the girls continue to toil the land as they anticipate their next pay. “Our parents insist that we should remain and work in this farm but they are unaware that we have not been paid yet,” she continued. Adding that she hopes once their parents learn that their boss is inconsistent with the wages they will cut them some slack and at least allow them to seek work elsewhere.

Asked why she has to force her children to work under harsh conditions their mother Motladiile Mmopi told Ink that she is trying to discourage destructive idle time on the part of her daughters. “Grace seriously flunked her Junior Certificate final exams because she was never focused on her school work. She has more time for friends than school. Lesedi on the other hand has been out of school since she was in Standard 7. She had a baby when she was just 13 years old and does not know who the father is to this day,” she pointed out. Mmopi reckons it is better for them to earn money no matter the conditions than be idle. At the time of the interview she was unaware that their wages were late.

Human Trafficking Desk Manager at Ministry of Defence Justice and Security Madoda Nasha confirmed that someone under the age of 18 cannot be employed in any full-time capacity. “However, where the child has attained the age of 14 and is not attending school, he or she may be employed for light work which is not harmful to his health and development by a member of his family or for such work as may be approved by the Commissioner,” he said.

He further stated that where the employment is other than of a domestic character in connection with which suitable accommodation is provided, the child is to return to his parents or guardian each night. “A child is not permitted to work more than six hours a day or 30 hours a week,” he pointed out.

Despite their mother’s skepticism, the youthful sisters still have plans to go back to school and make something decent of their lives. “After going through this ordeal we have realized that we belong in school but we fear that we might never get another chance. Our parents cannot afford to send us back to school and are hell-bent on that we should work instead anyway,” said a distressed Lesedi.

According to the Children’s Act, every child has the right to be protected from labour practices which are inappropriate for the child’s age or which have detrimental impact on the child’s education, physical or mental health, or social, moral or spiritual development. “A person who employs a child has to submit the necessary records to Ministry of Labour. Failure to do so can lead to a fine of P10,000. Any person who employs children will be fined P10,000 to P30,000 and can be imprisoned for 12 months to 5 years,” the Act further reads.

The Mmopi sisters’ story is not so far-fetched from the realities of  poor youth who live in the rural areas and end up being tricked into thinking they will get lucrative jobs. Lucky for the Mmopi sisters, their ordeal is happening close to home and where they plan to return once they receive their first wages. “He promised to pay us P50.00 ($5) per week each for working in his field. He has to bring our money soon. We will use that money next week to return home,” said the elder sister.

In the meantime, they feel they  have no choice but to labour on and hope they will eventually be given their wages.