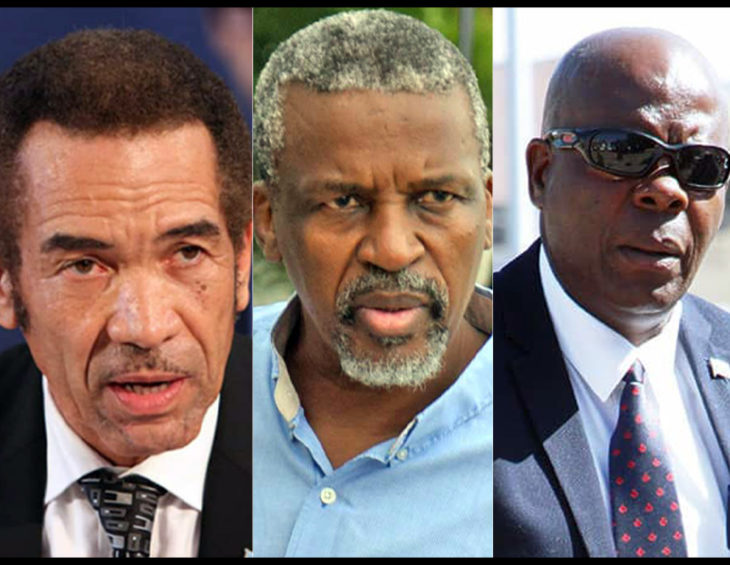 A leaked audio has revealed Botswana’s top spies, detectives and prosecutors huddled together in a meeting to strategies for an investigation into how former president Ian Khama and his ‘enforcer’ Isaac Kgosi may have instructed the Bank of Botswana to shift funds raised from government bonds during Khama’s term in office

Snippets of a tape-recorded meeting of senior government officials are likely to be added to the scope of investigations into allegations that between 2008 and 2018, ex-president Ian Khama and former head of the Directorate of Intelligence and Security Service (DISS) Isaac Kgosi diverted around P100 billion of public funds into secret bank accounts and later moved the massive sum to several offshore companies and banks.

The snippets may shed a new light on how the unprecedented heisting of public funds may have happened.

Also involved in the alleged scam is prominent South African businesswoman Bridgette Motsepe. The government has not supported the claims while Khama, Kgosi and Motsepe have consistently denied the accusations. Khama and Kgosi have previously been accused in court papers of instructing the central bank to create three Special Unit Accounts.

For the first time now, Brigadier Joseph Mathambo, then Director General of the Directorate on Corruption and Economic Crimes (DCEC), is shedding light on how this may have happened. In the recording, Mathambo tells a team of investigators that state funds may have been “leaked” in the form of matured bonds.

“We believe the bonds could have been where the leakage took place,” he says but does not elaborate. The former head of Botswana’s leading graft-busting agency has a background in electronic engineering, not in finance or capital markets.

“If (we are) not careful, it is where those investment when they mature, the funds got diverted (sic). We need to go step-by-step on this one.”

However, the former Director General of DCEC explains that he was not successful in his quest to inspect the central bank’s books of account because the head of DISS, Brigadier Peter Magosi, asked him to “stand down”. Mathambo says in the recording: “He called me and said, ‘No. You need to stand down.’”

He then tells the meeting that he subsequently spoke with the Governor of the Bank of Botswana, Moses Pelaelo, and withdrew his request to inspect the books of the central bank. “I told him I have reconsidered my position,” he says. “I am going to stand down indefinitely. I will come when I am ready.”

The Bank of Botswana has repeatedly denied losing any funds and emphasized that the central bank never had funds in the order of such a king’s ransom being investigated.

Reach for comment, Khama said investigators are just fishing for information because nothing happened. “But if that were true, it could still implicate BoB staff,” the former president said by WhatsApp.

The audio reveals detailed exchanges between the DCEC, DISS and the Directorate of Public Prosecutions (DPP). It was recorded at a meeting held at an undisclosed location at the Gaborone CBD in mid-August last year.

The authenticity of the audio has been confirmed by an intelligence agent who was a part of the meeting.

The central bank issues bonds via an auction to be bought by large banks and other financial institutions. Those institutions will then sell the bonds on, often to pension funds or other banks. Once the bonds expire or reach a maturity date, the government will pay investors back a set level of interest known as the coupon at regular periods. It is not clear how the profit could have “leaked” during Khama’s presidency, if it was.

The recording also gives a peak into government’s obsession with finding wrongdoing on the part former DISS operative, Welhemina Maswabi. “Honestly, when it comes to accountants, we have not made any progress on it from the DCEC side,” Mathambo says, suggesting a shift of focus to allegations that Maswabi lives beyond her means.

THE LEAK IS UNFORTUNATE AND DISTURBING – DCEC

The Directorate on Corruption and Economic Crime (DCEC) is disturbed by leaked recordings of a high profile government business meeting in which the DCEC Executive and officers were part of. Due to the explicit nature of these recordings, we feel obliged to state our position regarding this disastrous incident.

It is unfortunate and regrettable that the deliberations of such a classified operational meeting, during the conduct of an official government business were secretly recorded in this fashion and leaked to the general public, and by extension, potentially to the whole world, at a time when the country is dealing with sensitive serious national issues, amongst others, in the Anti-Money Laundering, Counter Financing Terrorism and Proliferation Financing space. As an agency, we certainly are appalled by this conduct, and so should every right thinking patriot. We consider it a privilege to have been chosen to serve this country and its people, and believe that as government officials we are trusted with the responsibility to conduct the affairs of government in particular, and of the nation in general, with diligence, credibility and integrity.

The DCEC further wishes to state that within all lawfully permissible limits, and necessary, reasonable and operational means, it will cooperate with any government agency to get the truth and have those responsible held to account, noting that neither official government business generally, nor matters related to investigations in particular, can be conducted in this carefree fashion where the end justifies the means.

We would like to further, reassure the public that the DCEC remains resolute in its quest to fight corruption as per the dictates of the Corruption and Economic Crime Act.