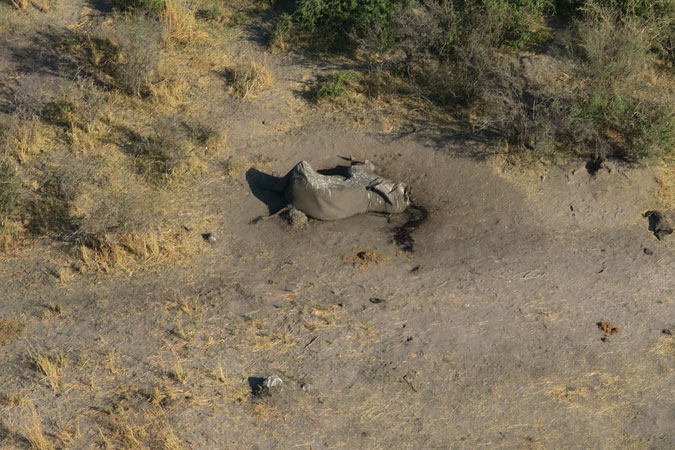 356 elephants die from a mysterious disease in Botswana

Botswana elephants continue to die in large numbers from a mysterious disease in the wildlife rich areas of the Okavango Delta.

A total of 356 elephant carcasses have been discovered in the delta after a 20-day helicopter search, Elephants Without Borders, an independent wildlife research organization said in a report recently.

More could die as some looked sickly, Dr. Michael Chase of Elephants Without Borders said, urging wildlife authorities to act quickly to establish the cause of death.

The report said on May 25 the organization counted 169 dead elephants. Additional carcasses totalling 187 were discovered on the 14th of June, bringing the total number of carcasses 356.

“We suspect elephants have been dying in that area over a period of three months,” said Chase.

Scientists have previously ruled out anthrax  – which occurs in Botswana  – as a cause of death.

Chase said he alerted the government on May 25 but did not get a response.

The most recent die-off has stunned wildlife officials. The elephant carcasses have been found intact, indicating they were not poached.

In December 2018, the government denied Chase an extension of a research permit after accusing the scientist of exaggerating poaching incidents in the Okavango Delta.