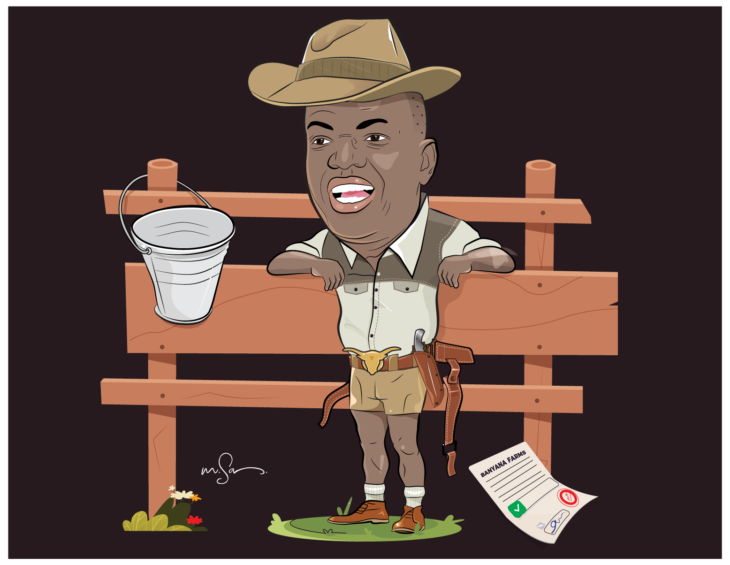 The latest muddy knot on a farm may show President Masisi to be a man more rapacious than popular opinion holds, Joel Konopo, Calistus Bosaletswe and Ntibinyane Ntibinyane investigate.

In what could be the most brazen example of President Mokgweetsi Masisi’s acquisitive streak yet, he has allegedly been pushed to the front in a tightly contested bid to rent a portion of Banyana Farms, the INK Centre for Investigative Journalism has established.

Impeccable sources say the President is now among three finalists out of a total of 39 bidders for Lot 2 after he applied in November 2019. It appears that in the course gaining this supreme advantage for Masisi, management of the state owned farmland had its own tender conditions flouted.

A document for sub-leasing portions of Banyana Farms seen by INK stipulates stringent compliance conditions that include compulsory site visits by bidders and sitting for oral interviews at a place preferred by Banyana Farms. According to one outstanding condition, bidders should not own a ranch in Botswana at the time of their bid. However,

INK can assert that President Masisi did not comply with all the requirements for sub-leasing any portion of Banyana for commercial livestock production because:

Efforts to shed light on these shadowy developments by contacting those suitably placed to know have met with little cooperation. The Office of the President, for example, declined to respond to questions sent by INK Centre. The Ministry of Agriculture, under whose purview Banyana falls, had responded, but sent the questions to the Office of the President where spokesperson, Batlhalefi Leagajang said they will be passed on to the Attorney General. Permanent Secretary to the Ministry of Agriculture, Jimmy Opelo had assured INK Centre that he will respond to questions by Friday.

These revelations come when concerns are rising that the President may have a more rapacious and aggressive appetite for accumulation of personal wealth than he has generally been perceived. Notably, since he assumed office in April 2018, Masisi is yet to declare his numerous business interests inspite of early presenting himself as a champion of transparency. He is currently linked to shareholding with several businesspeople of Indian origin, including the controversial Ramachandran Ottapathu of Choppies fame.

In November 2019, government reserved six portions of Banyana Farms for leasing out for 14 years, prompting 120 farmers to vie for them by making bids. The process is about to conclude and could end with successful bidders being made known in a few weeks. Banyana Farms are on a government ranch of about 149 000ha situated in Mabule in Kgalagadi District. The stated purpose of the project is promotion of commercial cattle ranching in Botswana. President Masisi was among a total 39 bidders who tendered for Portion 2, a 49 square kilometre piece of real estate for which it now emerges he has gained advantage over most of his fellow bidders, thanks allegedly to management of Banyana that has placed him among the top three finalists.

Piqued by this, a bidder who does not want to be identified has told INK Centre that Banyana Farms bypassed its own tendering rules to accommodate the President.

“H.E. wasn’t called for the interview,” the bidder said. “On the contrary, he called assessors to the comfort of his office.”

Leagajang (wrongly) claimed on Gabz FM radio this week that the President “doesn’t have farms elsewhere”. Pressed by the anchor Kealeboga Dihutso to explain further, Leagajang said the President had agricultural land.

“I know he is interested in Banyana Farms,” he conceded. Asked if it was okay for the President to do business with the government, Leagajang answered that Masisi does not sit on the Board of Banyana Farms and is not involved in its procurement.

The new revelations come against the backdrop of recent controversy involving Masisi’s financial interests in more than 10 companies, most of which appear to have been formed to take advantage of COVID-19 procurement.

The President’s interest in the 14-year renewable sub-lease of portions of Banyana Farms has upset some people in government, as well as certain employees at the project, especially that Masisi has allegedly been supremely aided to become a finalist in violation of stated tender conditions.

They point out that the Banyana tender document explicitly states that preference will be made to farmers “who do not currently own a ranch in Botswana”. President Masisi is known to own a farm at Sekoma that he recently displayed on social media. INK Centre has established that the two other bidders with whom the President is shortlisted do not own farms.

Leagajang said he would respond to INK Centre at a later stage because another publication had asked similar questions earlier. After promising to comment by Friday, he changed his mind and said the Office of the President was still consolidating the answers with the Ministry of Agriculture.

Everyone has to be treated equal

A former Permanent Secretary for the Ministry of Agriculture says he did not face a similar predicament when former president Festus Mogae showed interest in a ranch at Banyana Farms. According to Dr. Micus Chimbombi, Mogae then decided not to go ahead with his plans.

“We only helped with keeping his cattle at one of the research ranches around Serowe,” he recalled. “I then took it upon myself to inform him that there was a need for him to take his cattle and he obliged after keeping them for some time.”

In his experience, Chimbombi said, public officers could resist the pressure of politicians who showed interest in tenders.

“In principle they can resist but in practice that could make the outcome of their decision tilt in favour of those individuals,” said Chimbombi, who served as Permanent Secretary for Agriculture from 2008 to 2015 under Ian Khama as president. Now an opposition politician, he says he finds it difficult to see why Masisi was allegedly given preferential treatment by Banyana Farms.

There is no law in Botswana barring presidents from engaging in private business while in office. Even so, this does not mean it is morally justifiable for a president to do so because it could expose them to conflict of interest.

Other countries operate in a stricter and more transparent manner. Some foreign presidents have disengaged from private business upon assuming office, and/or placed their financial holdings and wealth in blind trusts managed by trustees. For example, on becoming president of South Africa, Cyril Ramaphosa placed his financial holdings in a blind trust. In the US, President Donald Trump completely disengaged from business, placed his assets in a revocable trust and appointed his sons as trustees. It is uncommon for presidents to set up companies while in office, at least in democracies. In 2011, the media revealed that President Ian Khama was a shareholder in Linyanti Investments, a subsidiary of Wilderness Holdings. Wilderness’s dealings with Khama were seen by many as an attempt by the company to buy Khama’s influence.