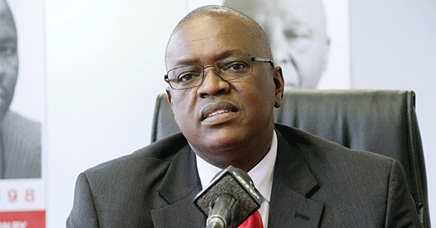 President Mokgweetsi Masisi has business interest in at least 10 companies with several highly connected businessmen of Indian origin, including controversial businessman and Choppies Chief Executive Officer, Ramachandran “Ram” Ottapathu, according to details gleaned from the Companies and Intellectual Properties Authority.

Choppies, a retail chain store, is a beneficiary of government business – it is a major supplier of groceries to the Botswana Defence Force, the prisons department as well as other government departments. The revelations come at a time when there is a public outcry for a citizen economic empowerment law.

Although Ottapathu denies accusations, he has cultivated a relationship with political elites not only in Botswana but on the continent as well. He concedes that his businesses attract “gentlemen.”

“Gentlemen invest in companies, it is not an offence,” he told INK Centre for Investigative Journalism.

Records show that between September 2017 and May 2020, President Masisi has acquired shares in several companies with links to persons of Indian origin. Days before he declared the State of Public Emergency and a lockdown, his detergent manufacturing company, Arcee Properties Limited registered six subsidiaries, with names suggesting that the businesses were aimed at benefiting from the Covid-19 multi-million Pula procurement deals. Masisi has 10 percent shareholding in Arcee, which was acquired in September 2017. Ottapathu holds 90 percent.

It is not clear whether these companies won government tenders during the Covid-19 crisis. Choppies remains Arcee’s main client, raking over P10 million in 2018 from the supply of detergent, including dishwashing liquid, according to Choppies’ annual report.

Arcee received over P22 000 in wage subsidies for its 20 employees – who each received P1,000 in salaries in the month of April. It is not clear whether Masisi paid for the shares in Arcee. In the past, the supermarket giant has delivered business and financial benefits to powerful members of Botswana and Zimbabwe elite, including President Ian Khama, former President Festus Mogae, former Zimbabwean vice President Phekezela Mphoko and the former head of the Directorate on Intelligence and Security, Isaac Kgosi. In 2019, Choppies co-founder Farouk Ismail and Ottapathu’s business partner admitted in an affidavit that he donated P2million to Masisi’s 2017 Botswana Democratic Party chairmanship campaign.

Ottapathu says his credibility has remained intact after a series of controversial business dealings. He boasts he “jailed” former Zimbabwean Vice President, Phelekezela Mphoko. Mphoko held 51 percent of Nanavac Investment, the Choppies holding company in Zimbabwe. It later turned out the company had used Mphoko’s political capital to flout the Zimbabwean indigenization law. Choppies said in 2018 that the Mphoko family only had 7 percent of the shareholding and the rest of the 44 percent was given to them so as to fulfill the indigenization laws of the country.

He said Mphoko “tried to do something funny” and he jailed him.

INK Centre also learned that Choppies has received favorable treatment from the government, notably over work permits for expatriate employees mostly from the Indian subcontinent. One of Choppies’ former board members, Dorcus Kgosietsile is a former Botswana ambassador to India.

Choppies has had a troubled relationship with auditors and is currently on suspension from the Botswana and Johannesburg Stock Exchanges. The retail giant has yet to submit the 2019 financial statement.

Responding to INK Centre questions, Ottapathu said there was nothing unusual about having a business with Masisi.

“He came in before becoming HE,” said Ottapathu. He wonders why there is so much interest in a tiny investment between him and Masisi.

“It is a start-up,” he notes bursting out in laughter. “We have intentions to grow the business.”

If there was something wrong with the business, Ottapathu and Masisi would have hidden the information from the public view, he claims.

“You see, we have nothing to hide.” He (wrongly) claimed that he does not do business with the government. Asked about an increasing pattern of his business relationship with powerful elites, Ottapathu said he cannot stop interfering with people wishing to do business with him.

Choppies relationship with political elites came under the spotlight in 2009 when it was revealed that it had transferred shares to Kgosi before it listed on the Botswana Stock Exchange. Kgosi told the Directorate of Corruption and Economic Crime that he did not fully pay for the shares but was repaying the debt from dividends. Asked if he made a similar arrangement with Masisi, Ottapathu declined to comment.

“You said you are a journalist, go check his books. Go and verify.”

Bobat is the chief executive officer of Leseding Interiors and an occasional benefactor to vice President Slumber Tsogwane’s constituency projects. Ramakrishna is a former chief executive of the Botswana Cricket Association and a former director at Grant Thornton. While the company’s line of business is not clear, the timing of its registration is raising suspicion that it may have been created to benefit from COvid-19 procurements.

As if this enough, the President has 100% shareholding in another company called Tsabong Developers (PTY) Ltd. The company was incorporated on January 30, 2020, according to records from CIPA. The company director is Masisi Ramogotsi Masisi, Masisi’s older brother. The company’s line of business is also not clear.

The importance of disclosure

When he took office in April 2018, Masisi promised to fight corruption and conflict of interest. It is perfectly lawful for Masisi to acquire shares in his private capacity.

The Green Book, an official document that provides guidelines for the President’s privileges is silent on the declaration of interests and liabilities. However, in the interest of transparency, it is problematic that his ownerships were not disclosed to the public. If this information is made public, it allows the public and competitors to determine potential conflicts of interest arising from Masisi’s commercial dealings.

According to Dumelang Saleshando, Leader of Opposition in Parliament, Masisi’s transparency deficit does not enhance the credibility of the presidency and the executive.

“There is nothing wrong with having shares in companies,” said Saleshando. “The political morality of it is problematic.”

In his view, the people who do business with politicians are buying influence. “It is a Gupta approach,” he said, adding that there is no difference between Masisi and Zuma (former South African president).

“When you are a public servant and you see a company in which the president is a shareholder, you will be obligated to give it a tender. There is no fair contest under such an arrangement.”