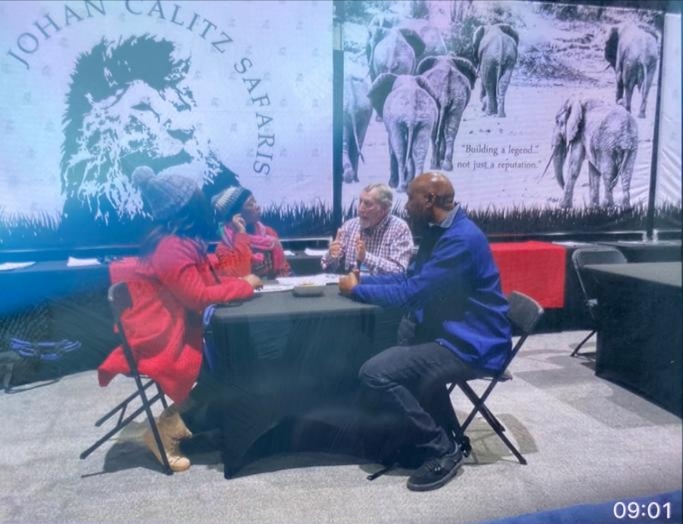 A storm has erupted over the government’s decision to hand Johan Calitz, a South African wildlife trophy hunter and associate of Botswana’s former environment and wildlife minister Kitso Mokaila, the exclusive right to hunt in a wildlife-rich area of northern Botswana.

The flashpoint is a directive from the permanent secretary in the ministry of wildlife, Oduetse Koboto, earlier this year ordering the Mababe Community Development Trust, near Maun, to work with Calitz’s company, African Field Sports (AFS).

Koboto was appointed by Mokaila when the latter was environment minister last year. He has since left the portfolio.

The ministry’s directive prompted complaints from the Mababe village chief, Kgosimontle Kebuelemang, that the community had gained nothing from a previous engagement with Calitz.

In addition, a rival operator has challenged the ministry’s decision in the Gaborone High Court. In its papers, Safari Partners argues that other communities have disposed of their animals by auction or open tender, and that the unique favouring of AFS in Mababe should be reversed.

It is alleged that Calitz paid for Mokaila and two board members of the Mababe trust to travel to Reno in the United States to attend a conference of the hunting organisation Safari Club International, as well as another meeting in Dallas, Texas, at which the Mababe hunting quota was discussed.

Mokaila’s predecessor in the environment portfolio, Tshekedi Khama, told INK that Mokaila had introduced Calitz to him while he was minister and that he knew they were working together.

According to the South African non-profit organisation, Conservation Action Trust, Calitz had his licence suspended in 2001 because of the allegedly unlawful conduct of his company during a buffalo hunt. The details of the offence are not known.

He declined to answer any questions when approached by the INK Centre for Investigative Journalism.

The current controversy follows last year’s decision by Botswana’s President Mokgweetsi Masisi to lift a five-year ban on hunting imposed by former president Ian Khama in 2015, on grounds that local communities are not reaping any benefit.

Under the new system a community is given a quota of animals that it can sell to hunting operations. Under an environment ministry directive of March 2, the Mababe community trust was told to issue African Field Sports ten licenses to hunt a total of 94 animals, including 20 elephants.

In a letter seen by INK, permanent secretary Koboto said: “The … hunting quota is available to Mababe … to utilize on behalf of the community but [it] will be working with the team identified by Ministry to engage African Field Sports to ensure that the community gets a fair and market value for the quota.”

Questions have been raised about Calitz’s relationship with certain board members of the Mababe trust, particularly its chairperson, Itumeleng Mogodu.

In November last year Mogodu and another board member, Mmoloki Ditirwa, signed a memorandum of understanding with Calitz giving AFS exclusive rights to the 2020 hunting quota.

According to Chief Kebuelemang, this constituted a violation of the Mababe community’s deed of trust because the memorandum was signed without the community’s consent.

Under the MOU, AFS will pay the community about US$1 500 for an elephant. A 2020 price list from Johan Calitz Safaris, an AFS subsidiary, shows it sells a single elephant for $70 000 – excluding fees and taxes – to trophy hunters.

According to Kebuelemang, who is also a board member of the trust, Mogodu appointed Mokaila a “consultant” to the community.

Kebuelemang also said that Calitz paid for Mokaila, Mogodu and Ditirwa to travel to the US in January this year.

The four had attended Safari Club International’s annual convention in Reno, Nevada, where the honour of “best legislator” was bestowed on President Masisi.

Kebuelemang said the four also travelled to another meeting in Dallas, Texas, to “discuss, among other things, the award of the Mababe hunting quota”.

Mokaila declined numerous requests for comment, urging INK to “write whatever you want”.

Calitz said through his secretary that he would not respond to media questions relating to Mababe.

But in an interview, Tshekedi Khama said he is not surprised that Mababe has become “a portal for self-enrichment”. He said Mokaila introduced him to Calitz in 2016 when he was minister of tourism, adding: “I knew that he was working with Calitz.”

Kebuelemang told INK that the community and other hunting operations preferred an open tender or auction in the allocation of hunting licenses.  He said he suspects the government was arm-twisted by “politicians who previously opposed hunting and are now assisting trophy hunters to identify local markets”.

He said that during the hunting ban, Calitz held a license on the Mababe community’s quota which expired in January last year. The South African also had a lease agreement with the community including a joint venture to run other businesses such as safari camps and a lodge.

However, the community had seen no benefit from these. When the Khama imposed the hunting ban Calitz had disappeared from Mababe village. “We only see this man when the hunting ban was lifted, and the manner in which he is coming back is worrying,” Kebuelemang said.

Sources in the wildlife and national parks department, who asked to remain anonymous said Mokaila had overlooked qualified and experienced officers when he appointed Koboto director of wildlife.

In 2015 the new environment minister, Tshekedi Khama, sacked him because “I didn’t think he was the right person”.

Asked about her relationship with Mokaila, Mogodu confirmed that he is a consultant to the community who has helped them navigate the complex sale of elephants to trophy hunters. She said the US trip was necessary, as it benefited the community to acquire knowledge about hunting.

Mogodu confirmed that the community trust has another joint venture with Calitz in Mogotho Lodge. It is a business partnership in which the community has a shareholding in the lodge.

Asked about allegations that she had violated the Mababe deed of trust, Mogodu said the board is empowered to make decisions without consulting the community.

She added that the community needs to continue working with Calitz’s AFS to create more employment, and accused Kebuelemang of fronting for other business interests. She did not elaborate.

In his letter to the Mababe Community Development Trust, Koboto warned that the trust would have to be investigated in connection with alleged corruption.

He did not provide details. However, the Mababe community trust’s book of accounts, which INK has seen, shows that the trust has debts amounting to P3.7-million and that 21 of its employees, who work at the Dizhana campsite and Mogotho Lodge, in the Okavango Delta had not been paid salaries for three years.

The book of accounts shows that the trust is “marred with issues of poor governance.”

It also indicates that the trust has not paid P4-million in taxes it has owed since 2017. The revenue service reduced the liability to P970 000, but was still unable to recoup the money.