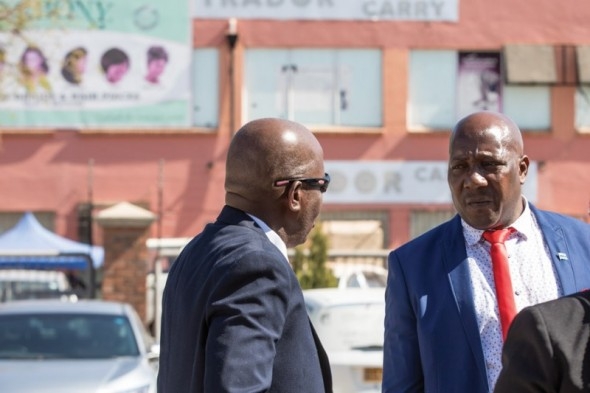 Top corruption investigator trailing a high-profile money laundering case – that involves former President Ian Khama and former head of secret service – has allegedly been slapped with a charge of insubordination by his supervisors.

Jako Hubona, a senior investigator at the country’s corruption watchdog is investigating a case in which Khama and the former head of intelligence, Isaac Kgosi are alleged to have shifted over US$200 million to several secret offshore accounts with the help of the central bank when Khama was president.

Khama and Kgosi deny the allegation.

The sting operation is a result of a Task Force among the Directorate on Corruption and Economic Crime (DCEC), the Financial Intelligence Agency and the Directorate of Intelligence and Security Services (DIS) that was set up in 2019 to investigate what, first appeared to be an elaborate scam by Khama and Kgosi with the help of associates including South African businesswoman, Bridgette Motsepe-Radebe to funnel P2.2 billion out of the country. Hubona represented the DCEC in the operation.

Investigators have not been able to provide evidence of money laundering. The central Bank and South African banks have also denied such accusations.

A corruption watchdog source at the DCEC who did not want to be named for fear of victimization told INK Centre for Investigative Journalism that the case, which has gone off like a dump squib, has divided investigating partners. At the center of the division, the source said, is the power dynamics among the heads of the corruption and intelligence agencies. DCEC is headed by retired Brigadier, Joseph Mathambo, while the DIS is headed by retired Brigadier, Peter Magosi. The two worked together at in the army in the 2000s. Magosi was head of military intelligence, while Mathambo, an electronic engineer does not have much clout in the field of investigations. Hubona stands accused of taking orders from DIS intelligence chief, angering his bosses at the DCEC. In one incident, Hubona is alleged to have travelled to interview a South African businessman in September 2019 without permission from his supervisors. Kgomotso Prince Mokgatlha of Bassonia Estate in Johannesburg is suspected to have received multimillion of tax-payers money from Kgosi in early 2019. Mokgatla confirmed to INK Centre that me met Hubona and Priscilla Kedibone Israel, a prosecutor from the Directorate on Public Prosecution.

After three days of absence, when he returned from Johannesburg, Hubona was allegedly summoned to Mathambo office.

“He told investigators that Magosi has advised him not to inform us about the trip,” the source explained.

When contacted, Mathambo said disciplinary processes at the DCEC are internal matters.

“It will not be right for me to discuss it because it’s an internal matter,” explained Mathambo.  He further stated that whatever ever action that will be taken it an internal matter that has nothing to do with the public.

The source explained further that Mathambo was infuriated by Hubona defiance when he traveled with Magosi to Maun to brief President Mokgweetsi Masisi ahead of election in October on the investigation without authorization. Mathambo is alleged to have summoned the investigator, who Khama has previously discredited in an affidavit as an unreliable investigator.

Fueling suspicion that he might be in trouble, Hubona recently skipped court case in which which suspended intelligence operative, Welheminah Mphoeng Maswabi is facing charges of money laundering in connection with the alleged transfer. As a result, the Gaborone Magistrate postponed the case to August. DIS Director, Magosi admitted to working with DCEC but could not be drawn into discussing Hubona. He denied knowledge of the charges.