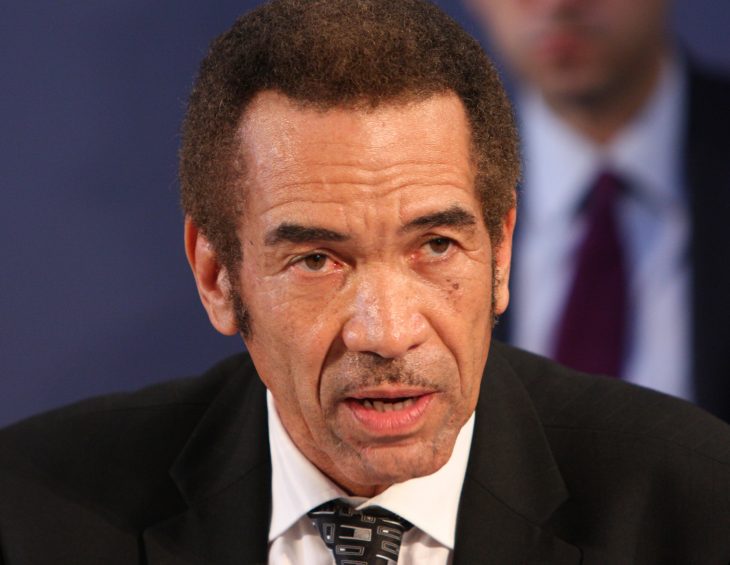 Also implicated in the alleged scam is the former head of the Directorate of Intelligence and Security Services (DISS) Isaac Kgosi, Khama’s close friend.

The two men are alleged to have used associates including South African businesswoman Bridgette Motsepe to funnel the money offshore .

Neither Khama, Kgosi nor Motsepe could be reached for comment. Motsepe said on SABC News on Wednesday that allegations against her are not true.

The allegations are contained in an affidavit  filed by the state in the prosecution of a little-known intelligence operative, Welheminah Mphoeng Maswabi, who is facing charges of terrorism, money-laundering and altering her identity in connection with the alleged transfer.

The terrorism charge is not explained in the documents. The prosecutors merely state that between December 2018 and September 2019, Maswabi transferred $2.9-million from the Royal Bank of Scotland account of Blue Files Inc to Kgosi’s unidentified account with “intent to facilitate the commission of an act of terrorism.”

Maswabi is also charged with possession of unexplained property and false declaration of a passport. She has denied all the charges through her lawyer, Unoda Mack.

She has been denied bail.

The state cites internal documents  from Bank of Botswana that detail 60 transactions between 2008 and 2019 involving more than 12 offshore accounts.

The documents allegedly show that Khama and Kgosi funneled more than $400-million to countries including Indonesia, South Africa, Britain, Scotland, the United States and Hong Kong with Maswabi’s help.

The Bank of Botswana Act does not permit a president to interfere with business of the reserve bank.

According to the court papers, Motsepe is linked to the South African-registered Blue Files Inc and another company, Fire Files Inc, in which she is a business partner with Maswabi, Debbie Brown Charles Van De Walt and Lucky Phume.

. Not all of those involved in the scheme have been identified, and law enforcement officials told the INK Centre for Investigative Journalism they believe the real total may be as high as $10-billion.

The court case could be seen as further a round in the intensifying struggle between Khama and his hand-picked successor as president, Mogweetsi Masisi.

One of Masisi’s first acts as president was to sack Kgosi as intelligence chief.

Maswabi, also known as Lorato Hilton, is said to had a sexual relationship with Kgosi by prosecutors. Court documents says she has over $390-million in several offshore accounts, a claim she denies.

State prosecutor Priscilla Israel, told the court this week that Maswabi had been charged  because she was the signatory to the accounts that were used to transfer money, including $48-million to the Standard Bank account of a South African company, Kgetha Pty Ltd.

According to the prosecutors, other signatories to Kgetha’s account are Kgosi and South African businessman, Kgomotso Prince Mokagatlha, of Bassonia Estate in Johannesburg.

In her responding affidavit, Maswabi denied having offshore accounts in any of her names.

“I have no knowledge of Blue File and have never been a signatory to its accounts,” she says in an affidavit tabled before the court.

Her lawyer challenged prosecutors to provide proof that Maswabi is the account-holder. The case is ongoing.