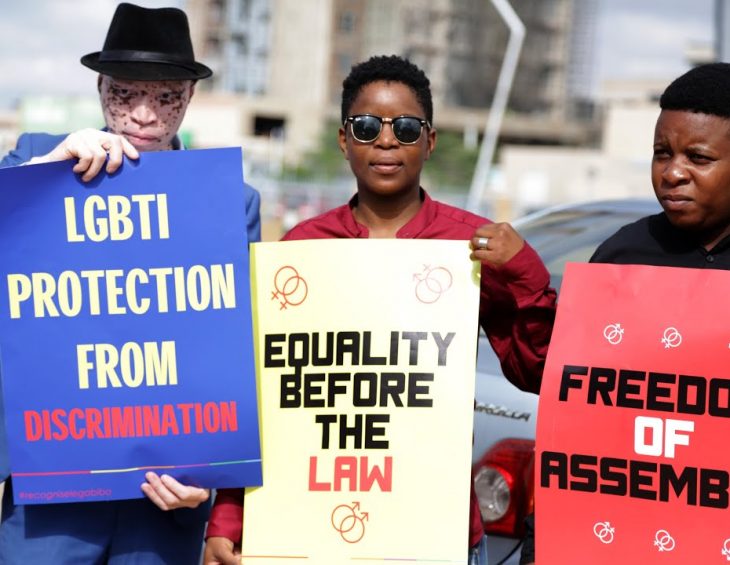 Some decry Botswana’s enlightened High Court judgement on gay sex. But studies show that homosexuality existed – and was tolerated – across pre-colonial Africa.

Certain African leaders keep telling us that “no African is born gay” – that homosexuality is alien to African culture and was brought to Africa by westerners.

No evidence is ever produced to support this claim. The history of our continent in fact shows that gays, lesbians and transsexuals were known in the pre-colonial era and, more importantly, were tolerated.

In particular, the 2000 work Boy Wives and Female Husbands: Studies of African Homosexualities makes a strong case that same-sex practices were recorded and institutionalised in many indigenous African societies.

According to Human Rights Watch, 32 of 54 African countries now have laws that criminalise consensual, same-sex relationships. But such laws are not indigenous: they were generally imported, either by British colonial governments or under Islamic Sharia law.

In some hard-line Sharia law states, including Mauretania, certain parts of Nigeria and Somalia, and Sudan, gay sex carries the death penalty.

Under British rule sodomy, described at the time as a “vice against nature”, was typically outlawed in colonial penal codes. In countries such as Tanzania and Nigeria, these restrictions have been amplified and hardened by new laws or government crackdowns.

In Nigeria for example, then President Goodluck Jonathan signed a Bill in 2016 that not only provides for a 14-year jail term for gay sex, but also outlaws same-sex marriage, gay clubs, membership of gay rights organisations and public displays of same-sex “amorousness”. The latter “offences” carry a 10-year jail sentence.

Uganda’s Anti-Homosexuality Act, signed into law by President Yoweri Museveni in 2014, broadened colonial-era legal by imposing a minimum life sentence for gay sex, forcing members of the public to report homosexual acts on pain of a three-year jail term, and imposing the death penalty for “aggravated homosexuality”, including gay sex with an HIV-positive person.

Overturned by the courts on a technicality in August 2014, it remains a threat.

Right-wing American Christians were blamed for stoking prejudice in Uganda. Frank Mugisha, the executive director of the organisation Sexual Minorities Uganda, ascribed the killing of a prominent gay activist to the American evangelical Christians who visited the country in 2009 to lead what many called “anti-gay workshops”.

“The blood of David Kato is on the hands of American preachers who came to Uganda,” said Mugisha. “They share much of the blame for presenting us as less than human.”

Two months ago the Kenyan High Court rejected a challenge by civil society organisations to a penal code that bans homosexual acts between consenting adults. The provision carries a 14-year jail sentence.

Hence the significance of last week’s judgment by the Botswana High Court that saw gay sex decriminalised in that country: the ruling swims against the anti-gay tide in Africa, and places tolerance of gay sex, pluralism and respect for minorities at the heart of democratic culture.

In his ruling, judge Michael Leburu said: “Our constitutional ethos of liberty, equality and dignity are paramount. Our constitution is a dynamic, enduring and living charter of progressive rights which reflect the values of pluralism, tolerance and inclusivity.

“Minorities who are perceived by the majority as deviants or outcasts are not to be excluded and ostracised. Discrimination has no place in this world.”

Entirely homegrown, the case was filed in 2017 by Letsweletse Motshidiemang, a gay man, and local gay rights movement Legabibo. They argued that three sections of Botswana’s penal code that refer to “unnatural offences” and “carnal knowledge of any person against the order of nature” were unconstitutional.

Early in 2019 a full bench of the Botswana court – judges Michael Leburu, Jennifer Dube and Abednego Tafa – heard arguments that these sections violated Motshidiemang’s rights to equal protection of the law and freedom from discrimination, to liberty, and to freedom from inhuman or degrading treatment.

The plaintiffs pointed to the public stance of the Botswana government, whose recent report to UNAids had noted that “stigma and discrimination are major constraints to universal access and utilisation of HIV and Aids services [in Botswana]”.

Criminalisation of homosexuality, the report said, impedes access to health by “driving vulnerable and marginalised individuals underground and away from public services”.

Botswana joins a handful of countries – mainly in southern Africa, where South Africa’s example may have been influential – that have decriminalised same-sex relations since colonial independence, also including Mozambique, Angola and Lesotho.

It has gone further than any other African state in protecting gay rights by entrenching the freedom of sexual orientation in its constitution and legally recognising same-sex marriage.

A potent alliance of conservative politicians (particularly those with a mainly rural constituency, such Zanu-PF in Zimbabwe) and right-wing religious organisations has played a major role in ensuring that colonial anti-sodomy laws are maintained or strengthened on African statute books, long after Britain decriminalised gay sex between consenting adults in private in 1967.

The most strident anti-gay voice in Botswana is the Evangelical Fellowship of Botswana, comprising evangelical and Pentecostal churches, which has labelled gay and lesbian sex as “unholy and against biblical terms”.

Its president, Pastor Jobe Koosimile, could not hide his disappointment at the High Court judgement. “It is very unfortunate but that will not derail us from our beliefs,” Koosimile said. “It is now more important than ever to reach out to those struggling with homosexuality, because it is nothing but a sin and God forgives all sins.”

He said he has “never seen any scientific proof that someone could be born gay. Even if there is proof, my belief is guided by the Bible which is against such acts.”

Local Botswana celebrity Pastor Thuso Tieto also condemned the ruling. “Unfortunately for us, Botswana has never been declared a Christian state … so a secular state is free to legalise all kinds of sinful behaviour,” Tieto complained.

“However, that does not mean homosexuality is right. We can only pray for those who are trapped in it like those in adultery, fornication, drunkenness and crime.”

Popular prejudice still abounds in the country: while some welcomed the judgement, social media was ablaze with claims that Botswana was betraying its values.

“This issue needs a referendum, not a panel of three judges. It has very serious moral, health and religious implications and three people can’t decide for the rest of us,” opined one of the protestors.

“It’s a tricky one,” said one oppositionist, speaking anonymously. “It’s election year, and you can’t just openly say you support the judgement because you want equal rights for everyone. That simple does not translate well with traditionalists and the larger portion of our Christian community.

“But I can’t just come out and say I don’t support gay rights, because that is not something voters in urban areas would agree with.”

The risk was being stigmatised for polluting “our” culture, the politician said.

Recent historical studies argue that homophobia was never a feature of traditional African societies until Christianity was introduced, and that homophobia is based on European, not African, morality.

Homosexuality was criminalised in Britain in the 1500s, and the provision was later extended to British colonies, including the former Bechuanaland protectorate (the colony that became Botswana in 1966).

Boy Wives and Female Husbands, a collection of academic essays edited by Stephen Murray and Will Roscoe, documents same-sex behaviour in 50 traditional ethnicities in every region on the African continent.

Offering extensive evidence from ethnographic and literary sources, the essays argue that there is no evidence that homosexuality was introduced to Africa by the West where it did not already exist.

It explores such traditions as institutionalised marriages between women, early reports of Malagassy “berdaches” (American Indian transsexuals), alternative gender identities among the Swahili, and mixed gender roles in East and West Africa.

The Portuguese, who were among the first Europeans to explore the continent, noted the range of gender relations in African societies. They referred to male-to-male sexual practices in the Congo as “unnatural damnation”.

In 1590 an English traveller, Andrew Battell wrote of Angola’s Imbangala: “They are beastly in their living, for they have men in women’s apparel, whom they keep among their wives.”

Boy Wives and Female Husbands argues that rather than dispel the myth of African sexual exceptionalism, anthropologists have often reinforced it by not investigating same-sex patterns of behaviour seriously and failing to report what they observe.

In his 1940 work The Nuer, British anthropologist Sir Edward Evans-Pritchard did not mention well-attested homosexual relations among the Nuer of southern Sudan, for example.

The study goes on to show that homosexuality was institutionalised to the extent that the warriors paid a bride price to the parents of the boys.

Similar practices were known in Benin, southern Nigeria, while marriage between women involving a bride price existed in many African societies, from Nigeria to Kenya and South Africa.

Turning to Botswana, the publication noted that pre-colonial Batswana did not share Western concepts of sexuality and gender.

Many Batswana men would have sex with men, but also have wives, it says. Homosexuality was not viewed as the antithesis of heterosexuality and there was broad latitude to move sexually between men and women.

In 2013 gay rights website 76 Crimes Erased reported on an encounter between Legabibo and 25 Botswana chiefs in which the latter conceded that homosexuality had always been part of local society, as indicated by the existence of a Setswana word for it, matanyola.

Remarking that the prohibition draws on the Bible, the chiefs reportedly agreed that “the Bible is against many things that are happening today … adultery or polygamy are allowed in our laws but prohibited by the Bible.”

Leburu’s judgment was not a bolt from the blue. The courts – and particularly the high court – have played a normative role by steadily strengthening the position of the LGBT community in Botswana.

In 2010, employment discrimination on grounds of sexual orientation was outlawed. Then in 2016 Legagibo won its first landmark case when the High Court ruled that it was unconstitutional for the government to refuse to register LGBTI rights organisations.

From the Faithful Word Baptist Church in US state Arizona, Anderson notoriously welcomed the gunning down of 50 people at a gay club in Los Angeles by saying “there were 50 fewer paedophiles”.

Botswana still has some way to go before gay people enjoy complete equality. It still prohibits same-sex marriage, gay membership of the defence force and joint adoption by same-sex couples, for example.

But there are signs that its LGBT community is emerging from the shadows and winning greater acceptance, particularly in the towns.

In addition to Legabibo, these include the Rainbow Identity Association and the Botswana Network on Ethics, Law and HIV/Aids, whose spokesperson Tebogo Gareitsanye said the main focus would now be to ensure the new legal position is understood by the public and key stakeholders.

New campaigns are not planned at the moment. Activists are focusing on mobilising health facilities and law enforcement agencies to make sure they understand their duty to provide equal services to gay Batswana.

“We are focusing on translating the new law into action on the ground and eliminating stigma,” Greitsanye said.