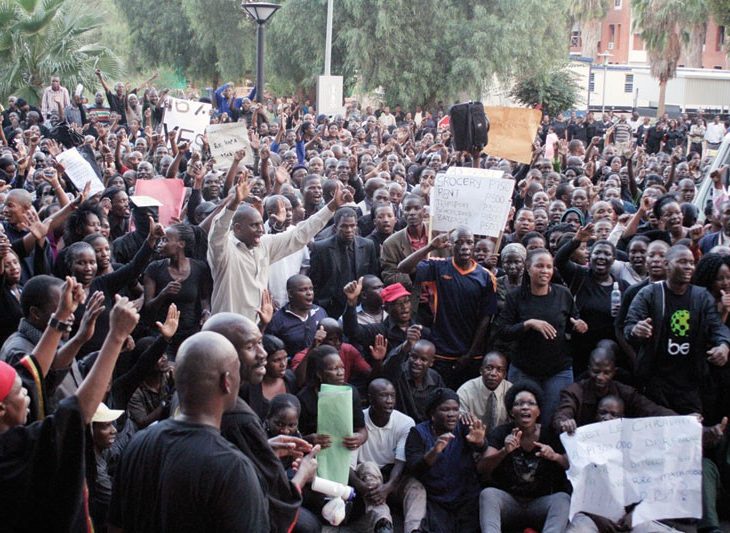 President Khama has not walked the talk in promoting democracy and transparency in his own country despite demanding same in countries such as Zimbabwe Kenya and Uganda. Under Khama, the media, opposition parties and unions have not been free. Image:www.mmegi.bw

How should we understand the foreign policy of African states? And why do some countries with a dubious record at home talk so much about democracy abroad? Esther Brown considers the case of Botswana, and offers some compelling answers.

The administration of President Seretse Khama Ian Khama (April 2008 to March 2018) marked a departure from the legacies of his predecessors. During this time, Botswana’s standing as a flourishing democracy was questioned by a number of democracy indices, amid reports of ‘creeping authoritarianism’ by Khama’s government. However, an overlooked characteristic of Khama’s rule was his development of a foreign policy of ‘democracy-promotion’, which stood in stark contrast to his domestic democratic rollback. Khama routinely and publicly criticised African and other world leaders (including Robert Mugabe of Zimbabwe, Omar Al-Bashir of Sudan, and Joseph Kabila of the Democratic Republic of the Congo) for undermining democracy in their respective countries. This disjunct has largely gone unnoticed, and Khama’s foreign policy stance is an important element of democratic analysis. The lack of alignment between Khama’s domestic and foreign policy approaches is highly unusual, both within Botswana’s post-independence history and among his African counterparts. Typically, very few African leaders extend their influence to the foreign-policy domain and instead foreign policy changes often mirror domestic influences. Yet, in the case of Botswana, Khama’s policies created a noticeable tension between his national and international rhetorics. Whilst Botswana’s shift in foreign policy is undoubtedly attributable to Khama, what is less clear is the reason behind it. Based on fieldwork conducted in Botswana during the recent presidential handover of power, I argue that Khama’s foreign policy shift is best seen as a smokescreen for his controversial domestic policy.

Suggestions that Khama’s foreign policy was driven by a genuine desire to promote democracy fail to capture the realities of Botswana’s political settlement. Firstly, it is vastly unaligned with his domestic policy, which ushered in a ‘politics of security’. In 2015 Freedom House downgraded Botswana’s political rights rating as a result of “decreased transparency and accountability in the executive branch”. Similarly, Afrobarometer reported a 17 per cent decline in the proportion of Batswana who perceive an adequate supply of democracy. Secondly, Khama’s rhetoric was noticeably selective and inconsistent. For example, despite the banning of opposition and repression of criticism in Swaziland, Khama continued to make state visits there, and in doing so was seen as endorsing the Swazi government’s undemocratic conduct. Khama also failed to condemn the ongoing tensions between Morocco and Western Sahara and in the process recognise the latter’s demands for sovereignty and self-determination as a nation state.

Critically, Khama consistently failed to back up his assertive rhetoric with any substantive actions. He never attended international bodies such the African Union or United Nations, instead dismissing them as expensive and inconsequential ‘talk shops’. These inconsistencies dispel the idea that Khama was driven by liberal-democratic considerations, and instead raise the question of what his motivations were for instigating this shift.

The Role of Zimbabwe Khama was a strong critic of Mugabe. Picture newtimes.co.rw

The Zimbabwean 2008 elections was cited as the trigger for Khama’s shift to a rhetoric of democracy-promotion. At the time, there were speculative claims that a civil war might break out, which risked a mass migration of Zimbabweans to Botswana, representing an ‘existential threat’ for Botswana due to its small population. It is often stated that Khama’s shift was in fact a reaction to this threat, and his government subsequently called for Mugabe’s removal from office. However, the claim that Zimbabwe’s failed elections were the cause of Khama’s change of stance deserves more critical examination. The prospects of civil war erupting in Zimbabwe were remote considering the violence was overwhelmingly led by the Zimbabwean state: a 2008 paper by Human Rights Watch noted that all identified cases of beatings, tortures, killings, and other casualties were on the opposition side. Whilst Khama did harbour a dislike for Mugabe, and was an ally of Morgan Tsvangirai, it is unlikely that this alone was the motive for his change in foreign policy rhetoric.

Khama’s attitude towards Zimbabwe fluctuated over the course of his presidency in accordance with Batswana national interest. Following a proposal to jointly develop the port of Beira and build a railway link between Botswana and Mozambique, which required the cooperation of Zimbabwe, Khama quickly altered his stance. In 2010 both ZANU-PF and the BDP sent delegates to each other’s party conferences. Khama’s change in stance raised doubts about his commitment to democracy-promotion and led to him being branded a hypocrite.

The Alternative: A Smokescreen

Given the inconsistencies in Khama’s foreign policy, both internally and relative to his domestic politics, an alternative explanation that I propose is that Botswana’s ethical foreign policy is better viewed as a smokescreen for domestic controversies. According to an interviewee during my fieldwork, Khama’s rhetoric was always ‘pro-West’, echoing Euro-American critical stances on Iran and North Korea, and supporting the International Criminal Court despite widespread regional calls for a separate African Criminal Court. A second source argued that Khama’s critical foreign policy played up to a media narrative of Afropessimism, and that Khama pandered to this by continuing to portray Botswana as the democratic success story.

This suggests that Khama’s ethical foreign policy was a calculated strategy to deflect attention from his own domestic democratic rollback, and to avoid censure from international leaders. This tactic was largely successful, since no international leaders criticised Khama despite democracy indices continuing to report an ongoing downward democratic trajectory. In turn, these indices remained blind to the domestic-foreign policy disjunct.

The case of Botswana illustrates the difficulties in the measurement and analysis of democracy and democratic trends: indices have restricted themselves to domestic level analysis, while international leaders simultaneously have sought to assert their democratic credentials on an international stage through foreign policy stances. The success of Khama’s smokescreen thus reveals three concerns for studies of African democracy. Firstly, it demonstrates the potential for more African countries to use foreign policy to distract from domestic policy. Secondly, it highlights the hazy Euro-American commitment to democracy, which is often satisfied with stability and external democratic presentation. Finally, the theoretical vacuum in relation to democracy and foreign policy demonstrating the need for an improved conceptualisation of how external and internal accountability interact.

Esther Brown is a political researcher, who has recently graduated from the University in Oxford with an MSc in African Studies, with a research focus on democratisation in Botswana.

* This article first appeared on Democracy In Africa (http://democracyinafrica.org/khama-chameleon-botswanas-foreign-policy-shift/), a website dedicated to the latest political developments and research on democracy in Africa