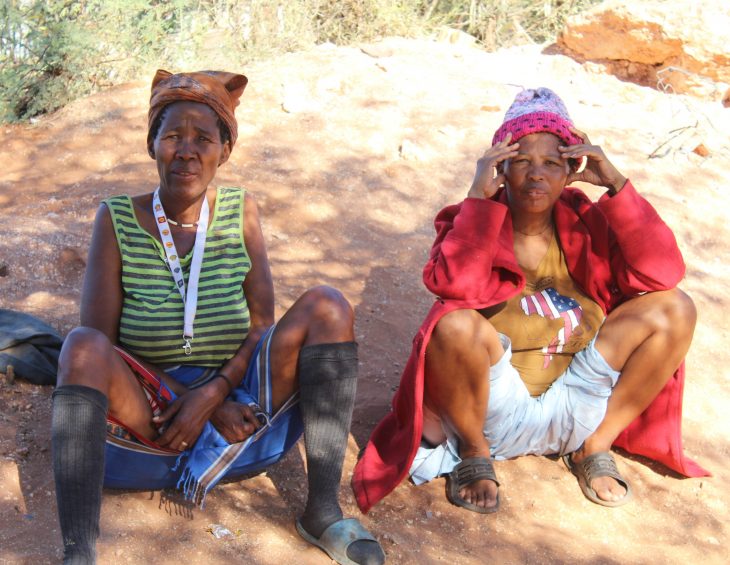 Basarwa have plenty of regrets. The biggest was adopting a constrained Tswana way of life that has given them diseases and introduced greed.
INK visited Qabo and Ghanzi in the heart of Basarwa country.

Squatting beside her sister outside a tiny shack of corrugated iron, sticks and stitched sacks,Qabo Thanku narrates her ordeal in the just-ended Ghanzi winter. Temperatures dropped to below 4 degrees Celsius, engulfing Meriting, a small settlement on the eastern edge of Ghanzi Township in western Botswana. Thanku’s one-year-old daughter endured freezing winter nights, and signs of malnutrition are apparent. Even though there is a boiling pot, there is nothing to cook.

Those who go to school are the lucky ones because they eat their only meal of the day. Thanku’s husband comes home once a month, from nearby commercial farms owned by white people, with little more than a bag of potatoes and vegetables.

“When it rains, this shack overflows,” Thanku says. “Water comes in through the roof, then floods our food.”

During the rainy season, the 33 year old – together with her sister, Mojadi Tshekoemang and 12 of their siblings, aged 7 to 15 years – had to seek refuge in a nearby shack reserved for village development committee (VDC) meetings.

Nearby, another family huddles outside a tiny house to relish the early morning sun. Barefoot children seem to have optimally adapted to chilly winter nights but it appears the harsh Ghanzi weather is taking a toll on them. Today they couldn’t go to school because “water did not come out of the tap.” The family shares a tiny two-room house constructed in a government housing scheme for the poor.

At 36, Tsebe Sobe looks much older than her age. Her failing health means that she spends most of her time doing little, in order to conserve energy. But life in Ghanzi dictates that she fend for her nine siblings. In October last year, her husband complained of chest pains and died shortly afterwards.

While she is ordinarily quietly spoken, her anger at authorities comes out in private moments of catharsis. “Sometimes I say things I shouldn’t say about this government… then I regret it later.”

She has not been employed, despite promises of a menial job from the local council.

“You mean not a single Mosarwa can work at [Ghanzi District] Council just picking up litter? It is only Batswana at council. We are neglected,” she chuckles, shaking her head. Her colleague, 50 year-old Maipelo Daabe, nods in agreement and adds, hysterically, “One day I will also take this government to court.”

A 2006 court case has taught Basarwa that disputes with governments are settled through the courts. The court of appeals granted Basarwa the right to remain as nomads on the land of their ancestors. Daabe believes that as Basarwa, they should take a judicial route to compel Ghanzi District Council to employ them.

If any place in Botswana illustrates the depth of depravity and poverty, it is Meriting, home to some 200 Basarwa on the outskirts of Ghanzi. Without jobs, most Basarwa pass time imbibing traditional brew and sometimes searching for menial jobs. Thanku and Sobe hope that they will be enlisted in Ipelegeng, a populist social safety net created by President Ian Khama’s government in 2009, that employs unskilled workers on a rotational basis to earn P500 (around $50) a month. The community of Meriting has arguably the worst record of unemployment and deprivation in Botswana. According to the Window of Hope Centre, a Ghanzi-based non-profit organization that monitors Basarwa deprivation, two out of three children drop out of school. Thanku and Sobe are some of the 32,000 Batswanans that the department of social services say are desperately poor and in need of food and shelter.

Basarwa are trapped in what anthropologists describe as a cycle of poverty, after the government pushed them out of the Central Kalahari Game Reserve by withholding life-giving resources such as water, and effectively relegating them further to the bottom of social strata, to live off scraps. At the reserve, the Basarwa lived from hunting and gathering to fend off hunger. Government policies deny them access to wild animals outside the reserve. Only a few remain in the CKGR, even after the Basarwa defeated the government in a marathon legal battle in 2006.

In Qabo, a desolate, flat, arid settlement some 70 kilometers north of Ghanzi, most issues are rooted in past grievances.

Home to some 500 Basarwa “coerced” out of Kuke and D’Kar and the CKGR in 1995, Qabo bares the scars of the pervasive violence Basarwa people continue to endure at the hands of authorities.

Before the government introduced a constrained Tswana lifestyle, Basarwa recall that their chosen lifestyle was supported by game, water and available plants.  Now the Department of Wildlife and National Parks uses the Wildlife and Conservation Act to forbid this kind of lifestyle, forcing them to rely almost entirely on handouts. Killing game attracts a fine of P5000 (US$500) and a five-year prison term.

“We can’t hunt anymore,” declares Nkamogelang Mothethi, a member of the village development community. “We are afraid of the helicopter.”

Mothethi says settlers in Qabo were enticed with livestock but quickly gave it away in return for liquor. Each received five head of cattle and several goats to disregard the natural life of Basarwa. With little understanding of commerce, they fell prey to the encroaching Tswana communities, exchanging cattle for as little as three cases of beer.

Just like Meriting, there is nothing quaint about Qabo. Poverty is abject. Most roofs are collapsing, and boiling water means more black tea in a hot Ghanzi sun, which everyone is tired of drinking as the only meal. Basarwa in Qabo have plenty of regrets. Others are nostalgic for life back in Kuke.

“We wanted to stay in that different Qabo not this one,” Rombe Dikgaka, a village elder points eastwards. This Qabo, he says, doesn’t have sufficient grazing land and cattle die from eating a poisonous plant called Mogau. But the government did not listen, and argued that there is more water in this place compared to Dikgaka’s preferred spot. Basarwa lack negotiation skills and are often forced to accept raw deals.

It is this kind of arm-twisting that has impacted how they assimilate with mainstream Tswana tribes. While they have gained social and political consciousness,  marginalisation has affected their relationship with party politics.

“Traditionally we are shy. Bakgalagadi come here to represent us. We need to be encouraged to participate in social and political affairs,” Keitumetse Lengane notes. Her colleagues mumble in agreement.

The government has not allowed Basarwa to choose which path they want to take and the forced assimilation has both social and political consequences.

Sobe is more cynical about party politics. “Politicians know about us during elections. It is the only time they know that we have to eat.” She adds that even the way they relate to education is measured. Few still go to government schools, because they find the teachers discriminatory and the materials uninteresting or irrelevant.

When it comes to health, few Basarwa frequent the clinic because they claim the nurses are often rude to them and do not speak their language, and hand them ineffective drugs. Traditionally, they fended off sickness using a variety of wild plants and tubers. In Qabo, they fault assimilation with Batswana, who came to do construction work and infected them with diseases.

Issues of HIV and how they relate to condoms are expressed as morbid social fascinations.  “Let me be open with you!” Moretwa Keraahela, clears his throat to draw utmost attention in a small VDC office. “We don’t use that thing,” he reveals and surveys the crowd. In Botswana one in five is HIV positive and Basarwa are increasingly getting infected because of lack of education. “Yes, we just glide past the condom… I don’t use it,” he says, and bursts out laughing. Everyone laughs.