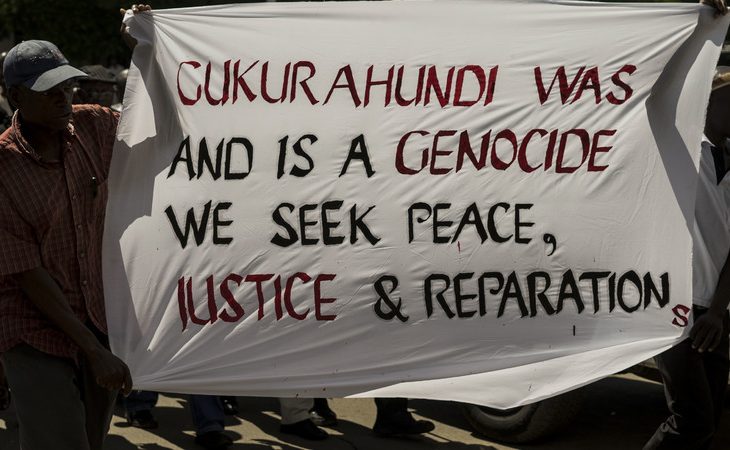 “People should see how a baby of a dissident looks like”.
This is what soldiers of the Fifth Brigade ominously told sisters Mabel and Khethisi Moyo, whom they accused of having been impregnated by dissidents on January 22 1983.

The two sisters were being paraded in front of terrified villagers that included their parents at Neshango Line in Western Tjolotjo (now Tsholotsho).

Seconds later,  the young and innocent women “were bayoneted and (stomachs) cut open so that people could see what a dissident’s child looked like. Some people during the same period were dragged away, shot and burnt to ashes.”

This upsetting recount of what happened in Matabeleland during height of the Gukurahundi massacres is an untold gory story of the atrocities committed by the North Korean trained Fifth Brigade, deployed by the then Zimbabwe’s Prime Minister Robert Mugabe in the Southern region to crush an insurgency by some dissidents linked to Zipra in the early 80s.

It is contained in a confidential report that was prepared for Mugabe’s “eyes only” by international Non-Governmental Organisations that operated in Matabeleland and the Midlands.

The report dated March 18 1983 did not sway him to withdraw the Fifth Brigade which continued their murderous rampage resulting in an estimated 20 000 civilians being killed.

A copy of the disturbing report which was kept under lock and key by Mugabe for years was obtained by anonymous investigators and shared with INK Centre for Investigative Journalism. The investigation was started after Zimbabwe’s new President Emerson Mnangagwa promised to bring closure to the emotive issue.

The dossier, replete with pictures of badly beaten up and dying people, noted that the two sisters were:

“Killed in presence of several people and their parents. They were accused of being made pregnant by dissidents. 5 Brigade claimed they wished people to know what dissident babies look like.”