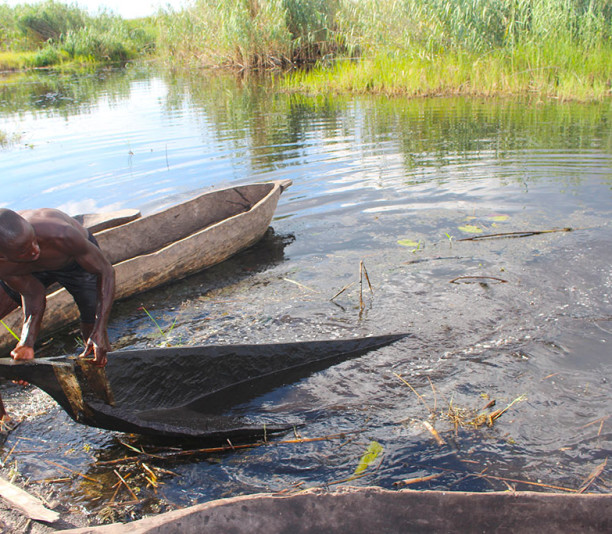 Samati Samati showing the remains of shing canoes damaged during a BDF raid along the Linyanti river.

Doctors who examined the body of a suspected Namibian poacher found something disturbing. Tileni Mgundhi, Joel Konopo and Ntibinyane Ntibinyane examine the consequences of Botswana’s shoot to kill policy through the eyes and voices of the survivors and the families of the dead.

On a chilly night near Ihaha Camp, in the Chobe National Park, Corporal Joel Mathe of the Botswana Defence Force (BDF) set out with his team on an anti-poaching patrol.
Making use of special assault rifles and night vision equipment, Lance Corporal Raymond Boitumelo Grey, Lance Corporal Aron “Two Pula” Makwati and Lance Corporal Phuthego Modise Phuthego mounted a listening post and picked up the sound of a canoe being paddled in the Chobe River. Using night vision, they observed two human figures carrying rifles disappear into the park. The two men are said to have returned carrying “whitish objects” – alleged by the Botswana military to be elephant ivory.

Mathe instructed his junior to illuminate the scene. Frozen in the moment, BDF assault rifles stuttered along the riverbank. A bullet hit one of the men in the chest, killing him instantly. The other vanished under the waters of the Chobe River that acts as a northern boundary between the two countries. This account of the incident, gleaned from police reports made by the soldiers, is supported by inhabitants of Kanvula and Nakabolelwa settlements near Katima Mulilo in the Caprivi Strip. They raced to the scene immediately after the gunshots subsided.

“We gathered on the river bank and saw Botswana soldiers,” recalled Mariam Simusiwa in an interview.  Her brother, Richard Siyauya Munguni , a fisherman, had not returned home that evening. “They wouldn’t talk to us; it was confusing.”In the first light of day, when the BDF loaded her brother’s canoe into a camouflaged Land Cruiser and waved a bloodstained jacket, Simusiwa’s worst fears were confirmed.  “They said it belongs to my brother,” she said quietly.Three days later, Nyambe Brian Nyambe’s body was discovered on the shores of the river with a bullet wound to the head. At the scene of the shooting, Jackson Munguni says he is struggling to come to terms with what happened to his son.

Namibian observers believe that the killing of Nyambe and Munguni on July 17 2012 was part of an unwritten shoot-to-kill policy adopted by Botswana towards suspected ivory poachers crossing the northern border from Namibia and Zimbabwe. It is a suspicion that has been heightened by Botswana’s flamboyant environment minister, Tshekedi Khama. In an interview in 2013, Khama said would-be poachers needed to know that they might not go home alive, and would be shot even if they surrender. The BDF claimed Nyambe assumed a retaliatory or attack mode when asked to freeze. It denied any involvement in human rights violations in the border area and said all its operations took place “under prevailing statutes”.

However, there are several apparent inconsistencies in the military’s version of what transpired that night:

A firearms expert interviewed by the Ink Centre for Investigative Journalism, who asked not to be named, said that the firearms allegedly in Nyambe and Munguni’s possession, a .22 calibre rifle and a 12-gauge single-shot shotgun, were not known for their accuracy and could not kill an adult elephant. Namibians were also angered by the finding of the Botswana inquest magistrate Gofaone Morweng on the deaths. Clearing the four soldiers of wrongdoing, Morweng said: “They applied caution to the situation by providing illumination … and their action did not constitute so gross a negligence as to constitute criminal liability.” “It was a planned killing,” charged Nyambe’s brother, who asked not to be identified for fear that his relatives in Botswana might be victimised.

Over the past two decades, 30 Namibians and at least 22 Zimbabweans have been killed in Botswana anti-poaching operations – but Namibian community and rights groups claim the figure could be much higher. They have urged Botswana to exercise restraint when dealing with poachers. Anti-poaching operations have also increased border tensions between Botswana and Namibia, amid claims that the BDF has violated Namibia’s sovereignty. The tension is palpable in Kanvula and other smaller settlements in the Chobe region, as BDF raids are frequent.

READ MORE: I hid in the swamps, Samati

“The Botswana government values wildlife more than human life. ” objected John Ntemwa, leader of the Zambezi Youth Forum, a youth movement based in Katima Mulilo in the Caprivi Strip that claims to monitor and catalogue BDF killings in the region. “We are worried that most of the people who have been killed were not poachers but fishermen,” Ntemwa said. “More than 30 lives have been lost since independence – this cannot be allowed to continue.” Namibia’s Deputy Prime Minister and Foreign Affairs Minister, Netumbo Nandi-Ndaitwah, said that her government initiated talks  in May 2014with Botswana, which gave the assurance that it would no longer kill suspected Namibian suspected poachers. Since then there had been no deaths, she said. She added that “in Namibia, we arrest – we do not shoot to kill”.

The tough policy on poaching has been given added impetus by Botswana’s shrinking economy, which faces a decline in revenue from diamonds, its main industry. The country is unlikely to meet its official growth target of 4.2% this year. Tourism, the second highest revenue earner, contributes 15% of the country’s GDP and provides 30 000 formal and informal jobs. Situated where the borders of Angola, Botswana, Namibia, Zambian and Zimbabwe meet, the Kavango-Zambezi Transfrontier Conservation Area has 200 000 wild elephants, more than anywhere else in the world.

Tshekedi Khama, the brother of Botswana’s President Ian Khama, lifted the lid on the government’s approach in his 2013 interview with British filmmaker, Tom Hardy, who was making a documentary called “The Poaching Wars”. “It’s a culture; we have to kill the supply to starve the culture,” Khama said. “That is one of the reasons why in Botswana, with our anti-poaching unit, we don’t necessarily interrogate the poacher,” he told the seemingly stunned filmmaker.“That is a position we adopted to send a clear message to say if you want to come and poach in Botswana, one of the possibilities is that you may not go back to your country alive,” Asked by Hardy if the policy applied to locals, Khama said it was. He went on to say that even if a suspected poacher drops his gun and raises his hands, the BDF will shoot.

Tshekedi Khama has business interests in arms procurement and has reportedly supplied the BDF with arms and ammunition through his company Seleka Springs. Attempts to obtain comment from him about his business interests and Botswana’s anti-poaching policy were unsuccessful. Questions to the president’s office about whether the BDF has a shoot-to-kill policy and if so, whether he approves of it were also not answered. The former military commander, Khama has a firm grip on the BDF and has no qualms about using it in crime-fighting operations. In May 2009 he controversially stepped in to pardon soldiers who pumped 16 bullets into an alleged criminal, John Kalafatis. while he was sitting unarmed in the back seat of a car in Gaborone, and allowed them to return to their positions.

When President Khama came into office in April 2008, he also created the feared Directorate on Intelligence Services, which takes an active interest in poaching in northern Botswana and interferes  in the activities of the BDF, police and game-rangers. President Khama also has a beneficial interest in wildlife conservation in the Chobe region: the Mail & Guardian revealed in 2011 that he has a business connection with Linyanti Investments, a subsidiary of Wilderness Investment Holdings. In terms of a 15-year lease agreement signed in January 2010 between the Tawana Land Board and Linyanti Explorations, Khama has 200 000 shares in Linyanti Investments, the owner of 1 300 sq km Linyanti Concession bordering the Caprivi Strip. He is a joint shareholder with his conservationist friends Derrick and Beverley Joubert, who facilitated the relocation of 100 rhinos from South Africa to the Linyanti Concession in 2014, heightening its attraction for tourists– and poachers.

According to media reports, Wilderness’s flagship facility in the Okavango Delta, the Mombo camp, is seen as threatened by increased poaching. It is possible that the wrong people are being targeted for the increased poaching on the Namibian-Botswana border. In December last year Phil ya Nangoloh, executive director of Namibian human rights group Namrights, called for an independent commission of inquiry into what he termed the alarming increase in poaching, saying that high-ranking Namibian political figures are implicated in the black-market sale of rhino horns and elephant tusks. Without naming them, Ya Nangoloh alleged that a Cabinet minister, a former minister and a leader of a traditional authority are the kingpins of a poaching ring.

Death is not the only risk run by inhabitants of the border area. Some talk of incarceration in harsh prison conditions and of spending nights in crocodile-infested swamps as BDF helicopters hover overhead. There are also claims of assaults by BDF soldiers on suspected poachers, who say they are forced to watch while their dugout canoes are destroyed. In an interview, a woman from the village of Subiya said that she and her two year-old son spent three days in a sub-human conditions in a Botswana police cell after being found in possession of dried fish on Stongo,  a disputed island in the Linyantsi Rive between Namibian and Botswana.About 70 other Namibians who say they are fisherman were charged will illegally crossing the border. They say they were ordered to pay fines, while those who could not pay received three lashes of the cane on their bare backs, a colonial punishment still practised in Botswana’s customary courts.

Asked to react to criticism of its anti-poaching methods, the BDF said it would not respond to allegations. “We are not on the habit of commenting on allegations; albeit we wish to succinctly reiterate that our mission is to defend Botswana’s territorial integrity, sovereignty national interests,” said the force’s director of protocol and public relations, Colonel Tebo Dikole. He said the BDF acts competently and “within the constraints of the prevailing statutes”, adding: “The BDF is not involved in any human rights violations, harassment of women with children nor have their members been issued a shoot to kill order.” While stating that Namibia’s laws unequivocally prohibit poaching, Nandi-Ndaitwah admitted that there are challenges regarding the exact position of the border and the hick bush, forests and marshlands that surround it.

Namibia’s environment minister, Pohamba Shifeta, said Namibia has arrested poachers from Botswana, but has never killed anyone. “We never had loss of life for apprehending a suspected poacher in Namibia. If it can be done without loss of life, it should be kept that way.” Shifeta said poaching is a regional and international challenge that does not only affect Namibia. He said the Zambezi region is more vulnerable to elephant poachers, while the Kunene region is where more incidents of rhino poaching incidents take place.   He added that his ministry has created a wildlife intelligence and investigations department within its wildlife protection services division, to work with the Wildlife Crime Prevention Unit – a body that includes representatives of all Namibia’s neighbours. The unit’s aim is to coordinate anti-poaching efforts. When poachers enter Namibia through Zambia, for instance, the Zambian authorities are supposed to notify their Namibian counterparts.

Border conflicts between Botswana and Zambia are not new. In the 1990s the Botswana military occupied Sedudu/Kasikili Island, sparking a conflict that was resolved by the International Court of Justice in the Hague.

Also in dispute is the alleged BDF practice of pointing guns at fishermen on the Namibian side of the border, accusing them of either scaring animals or over-fishing.