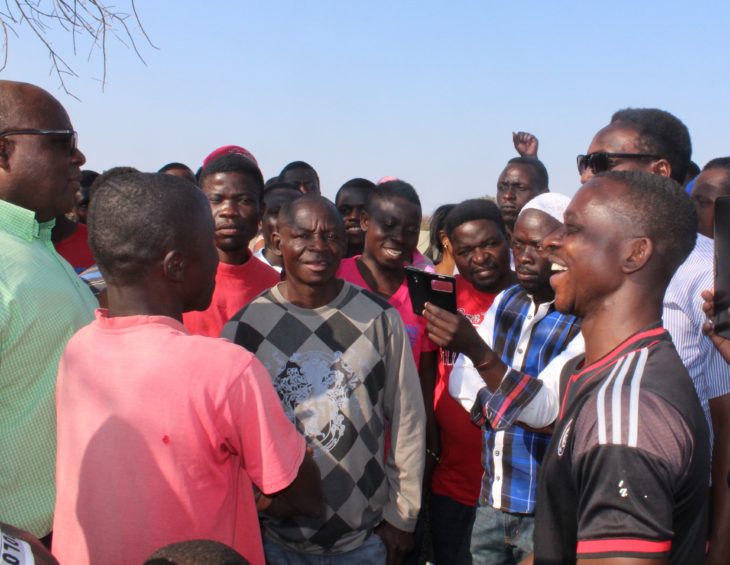 ‘It was not an easy battle’

I first met some of the current rejected asylum seekers in December 2016, although my first encounter with refugees began in 2004.

At the time I was involved in a case concerning a Somali recognized refugee detained at the Francistown Centre for Illegal Immigrants whose status had been revoked by the Minister of Defence Justice and Security without giving him a hearing.

He filed a successful urgent petition for his release from custody on the 31st December 2016 with a prayer that he be kept at the Dukwi Refugee Camp where he was resident until final determination of review proceedings against the minister. However that was not to be. Upon release he left the country the same night and never returned.

So, soon thereafter, I was approached by ten detainees of various nationalities seeking consultations on their status in prison. The first of these cases was of two Burundians; a Namibian and a Zimbabwean recognized refugees residing at the Dukwi refugee Camp whose statuses were revoked without giving them audience – what we call in legal parlance as the principle of audialterampaterm which means both sides of a case must be heard before a decision is taken on the matter.

They filed an application for release pending the filing of review proceedings against the Minister of Defence Justice and Security for him to show cause why his decision could not be set aside. They were released on the 13th April 2017 but unfortunately without a specific court order to reside at the Dukwi Refugee Camp. They however returned to the Camp.

The second case was of two Somalis who had been detained for over 16 months at the centre and the third was of a 19 year old Somali young woman alleged to have been a victim of human trafficking from Kenya even though she denied it. They were also released on the same day without an order to reside at the Camp.

Of the seven released on the 13th April 2017 the Somalis were re-arrested and detained at the Tlokweng Police Station near Gaborone on the 25th April 2017. No reasons were given for their detention. Eleven days later they were declared prohibited immigrants by the State President and later deported to Somalia.

The fourth and fifth cases were of three Congolese women Marie Iragi; Theresa Butoyi and Sophia Laheri and their children whose application was for repatriation to Congo DR with an alternative prayer that the court grants an order to be housed at the Dukwi Refugee Camp in the interim whilst arrangements were being made for their repatriation.

For some strange reasons the Attorney General opposed the petition even though he prayed to be given time to make arrangements for their repatriation. They were released and housed at the Dukwi Refugee Camp on the 4th May 2017. They were never repatriated. The Attorney General appealed the order which was heard before the Court of Appeal on the 19th October 2017.

The fifth case was of a couple which was heard on the 28th April 2017 and released on the same day. They left for Namibia where they are currently in a refugee camp in that country.

The sixth case involved 164 adults and 195 children filed under Egama Ngezi. They had been in prison from six months to over two years without hope of release. In the latter case the orders they sought, among others, were that their detention was unlawful and also sought an order to be housed at the Dukwi Refugee Camp until a third country willing to take them is found.

For the reason that in both Egama Ngezi and Marie Iragi cases the Attorney General was ordered to accommodate them at the Dukwi Refugee Camp, the government appealed these orders to the Court of Appeal. Both cases were heard on the 19th October 2017 with specific prayers that the Court of Appeal should find that in both cases the lower courts erred and that the orders given then be set aside.

In both cases government succeeded.

IMLPICATIONS OF THE APPEAL ORDERS

In its judgment the court of appeal reversed the orders given by the High Court and specifically stated that the Government was entitled to return some or all of the freed rejected asylum seekers back to the centre for illegal immigrants as that was where they were supposed to be. On Friday 1st December 2017 a decision was made for the return of the rejected asylum seekers back to the Francistown Centre for Illegal Immigrants by 10 am on the 2nd December 2017.

That night all of them varnished and resurfaced in Namibia; South Africa and Zimbabwe seeking asylum where they are currently in refugee camps.

Asylum seeking is an issue of both domestic and international law. In Botswana an asylum seeker appears before the Refugee Advisory Committee established in terms of section 3 of the Refugees (Recognition and Control Act) 1967 for an interview to determine whether or not he qualifies as political refugee.

If he fails the test he is rejected as a political refugee. A person subject for removal must be detained for a reasonable period to allow arrangements for his removal from Botswana. Section 7 of the Above Act reads thus: ‘

‘Notwithstanding section 6(b), any person detained in pursuance of that section shall, unless liable to detention under some other enactment, be allowed to depart from Botswana for the purpose of entering some other country if he satisfies an immigration officer that it is lawful for him to enter such other country without his possessing a right of re-entry to Botswana and that he possesses the means and in fact intends to enter that country.’

In the cases I handled it was quite clear that detainees were never informed of their rights such as the right to leave Botswana should they find a country willing to take them. No one said anything to them. They were all forgotten. Contrary to what the Court of Appeal said, the Attorney General failed to produce warrants holding them in prison.

A detainee cannot be held in prison without a warrant for more than 48 hours even if such a detainee is an illegal immigrant. Such warrant must be issued by the authority which placed him in detention. Despite the absence of these, the Court of Appeal held that a warrant by an immigration officer is sufficient yet none were produced.

The detainees argued that because they escaped political persecution and instability they could not be refouled (forcibly returned to where they came from). The very reason why the only place they could be placed was a refugee camp.

Unlike other countries, Botswana argues that only recognized refugees are housed in a refugee camp. Therefore a rejected asylum seeker according to Botswana must, whilst in Botswana, remain detained liable to be repatriated to his home country even if it is in a state of war.