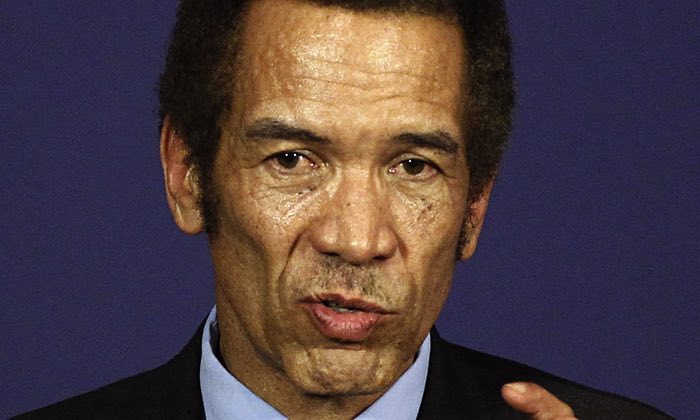 The regime of the Botswana president is accused of eroding good governance and democracy, as the economy starts to lose its lustre.

In a continent in short supply of exemplary leaders, Botswana gets accolades as a bastion of democracy and good governance. Yet this perception is misleading. The southern African nation with a population of 2.1 million is descending into monocratic rule under President Ian Khama.

For decades, the diamond-rich country has been praised as an “African tiger” that has avoided the resource curse – the corrosive effect of strategic mineral resources in promoting social divisions and kleptocratic elites. Botswana has achieved an 85% literacy rate, while 90% of children of primary school age are enrolled.

Most HIV-positive citizens receive life-saving drugs. To the outside world, president Khama, a UK-born son of Botswana’s first president Seretse Khama, has won a reputation as one of Africa’s most outspoken figures.

In 2016 he told Zimbabwean president, Robert Mugabe, that it was time for the long-serving nonagenarian to retire. Last year Khama refused to recognize Ugandan president, Yuweri Museveni’s electoral victory. And he broke ranks with the Southern African Development Community (SADC), as well as other African leaders, when he announced he would hand over Sudanese president, Omar Hassan Al-Bashir, to the International Criminal Court – where he faces war crimes charges – if he visited Botswana.

Yet at home, Khama’s regime has seriously undermined good governance and democracy. He inherited a stable economy powered by a buoyant mining sector, which has been the driving force of Botswana’s economy, helping the GDP grow at an average of 7% a year for most of the 1990s.

But the growing haemorrhage of mining revenues to corrupt officials and businessmen has weakened the economy. Pervasive corruption and deep inequalities of property owner- ship and income continue to pose problems.

According to a 2015 survey by Afrobarometer, an independent democracy research organisation, at least eight out of 10 people in Botswana believe corruption has increased during Khama’s leadership. It has downgraded the country’s press freedom ranking. “In my country we are regressing,” a former president, Festus Mogae told the African Leadership Forum in Tanzania in 2014 when asked about Botswana’s increasing culture of deportation and increasingly stringent visa requirements.

An Oxford-educated economist, Mogae reinvested the national surplus in infrastructure and education during his eight-year period in office, while avoiding wastage of potential investment funds in prestige, non-productive projects. Observers attribute Khama’s impatience and intolerance to his upbringing. Like most founding presidents, his father ensured that his children received every advantage.

Seretse parachuted Ian into military leadership after his graduation from Sandhurst, a UK military training college, making him one of the youngest brigadiers to serve in Botswana’s army, at just 24. Certainly, Khama has shown no patience for dissenting views, even within the ruling Botswana Democratic Party. In 2009 he expelled its secretary general, the late Gomolemo Motswaledi, after he questioned some of his decisions.

Motswaledi later formed an opposition party, the Botswana Movement for Democracy, which joined a coalition of opposition parties and threatened Khama’s government in the 2014 general election, winning 53% of the popular vote.

Commentators say Khama’s populist policies have seen unemployment grow and, in particular, that they have disenfranchised the youth. Youth unemployment exceeds 40% – one of the highest figuresamong middle-income economies. A fifth of the country’s two million people live on less than $2 a day.

But Khama’s administration appears to be losing patience with dissenters. Last year, for example, a group of unemployed youths marched on parliament demanding that government take a more active role in job creation. Riot police violently suppressed the protest and arrested journalists. When four High Court judges differed publicly with the chief justice, Khama moved swiftly to suspend them, throwing the entire judiciary into disarray. He later pardoned them.

Since Khama took office in 2009, there has been a marked increase in the number of extrajudicial killings, torture and harassment of members of the public by plainclothes security agents, a security expert told Africa In Fact. Just a year into office, he established a spy agency, the Directorate on Intelligence and Security Services (DISS), but its mandate and role are unclear.

DISS has wide ranging powers to arrest, seize and detain without warrant, according to the Intelligence and Security Services Act of 2007. Within a little more than a year, reports of a high-profile incident involving military intelligence officers shook the country. On the evening of May 13, 2009 a man said to have been a convicted criminal, John Kalafatis, was shot dead in a hail of bullets in his car in Gabarone.

The killing was the second such shooting within a week, and appeared to have all the hallmarks of an extra-judicial killing. Khama later pardoned the four men who had been convicted of the killing and were serving prison sentences. When it comes to money, the former army general’s personal preference is for a lavish lifestyle. He is reported to have purchased a luxury caravan worth $200,000 at taxpayers’ expense to entertain himself and his friends. He also has an appetite for grand, wasteful projects.

Recently, he ordered eight second-hand Gripen model “C” and “D” fighter jets worth $1.7 billion – spending almost half the country’s annual national budget in a deal that one aviation expert in a media interview said the military did not need and could not afford.

In December 2015, when the global commodity slump began to bite, Khama withdrew $350 million from the Pula Fund, a stabilisation reserve created with diamond revenues, to create an economic stimulus package. But critics allege that the money was largely splashed on tenders that went to loyal Botswana Democratic Party members.

His younger brother, Tshekedi Khama, minister of tourism and conservation, has been at the centre of a scandal after purchasing a luxurious Beechcraft King Air 350, worth $5 million, at the taxpayer’s expense. The younger Khama claimed the plane was for anti-poaching missions – despite objections by the same aviation expert, who commented that the aircraft had not been designed for such a purpose.

Khama appears to be unconcerned by the recent loss of 6,000 jobs when a major copper-nickel mine in central Botswana closed and was subsequently sold to a United Arab Emirates firm for a fraction of its cost. The head of the country’s spy agency, Isaac Kgosi – Khama’s former batman in the army – is accused of using his position to undermine efforts to investigate him after he was linked to the receipt of shares from major supermarket chain Choppies in 2013. Kgosi is yet to be prosecuted in relation to a number of corruption allegations.

Many institutions set up to fight corruption have themselves been compromised. Opposition politicians say the Directorate on Corruption and Economic Crime (DCEC) is weak and lacks independence. “People believe leadership is corrupt, hence they become corrupt themselves,” Umbrella for Democratic Change main opposition party spokesperson, Moeti Mhwasa told Africa in Fact.

But nothing better illustrates Botswana’s limits to democracy than Khama’s disdain for private media, which he has declared to be “shallow, boring … never contributing anything,” unpatriotic and partisan.

Members of the government, especially senior civil servants, including some employed by the corruption watchdog, the DCEC, believe that private media should be controlled. Khama himself told the Botswana Guardian newspaper in a 2013 interview that the media is “generally indisciplined”.

Khama is thought to favour regulating the media and is a keen proponent of the Media Practitioners Act of 2008, which a 2014 UN expert team described as having caused “some controversy, as Botswana already has an independent, self-regulating press council”.

The Act compels all journalists to register with, and to obtain accreditation from a media council. A minister in Khama’s office appoints members of the council, who decide who can become a journalist. However, the Act is currently in abeyance because the Law Society of Botswana, whose participation is required, has expressed its opposition to the law.

Moreover, Khama has threatened to sponsor defamation lawsuits against the private media brought by cabinet ministers, in what appears to be an elaborate plan to weaken the media. Eric Molale, minister in the office of the president, is notorious for not taking media questions.

In the run-up to 2014 general election, Botswana arrested, detained and threatened as many as 16 journalists. Sunday Standard reporter, Edgar Tsimane, had to flee to South Africa after his brother, who worked in the intelligence services, tipped him off that his life was in danger. In 2014, editor Outsa Mokone became the first Botswana citizen ever to be charged with sedition. Mokone and Tsimane had reported that Khama had been involved in a car accident that had not been reported to the police.

“The sedition charge against Outsa Mokone and his arrest make it increasingly clear that freedom of expression is under attack in Botswana, as the government tries to silence journalists,” said Freedom House, a US-based research and advocacy organisation in a 2014 report.

Last year, a freelance journalist, Sonny Serite, was arrested on suspicion that he was about to obtain classified documents that revealed corruption in the presidency. In March this year, three journalists from INK Centre said they had received death threats from seven plain-clothes security agents when they tried to investigate allegations that Khama was using the Botswana Defence Force to run personal errands and renovate his private residence in central Botswana.

When asked, government said the journalists had tried to trespass in a restricted area, but it did not clarify this any further. While Khama’s popularity, as measured by Afrobarometer ahead of the 2014 general election, has been declining, the frustration does not show on the faces of most people in rural areas. As soon as he became president, Khama moved quickly to consolidate his electoral base by introducing populist programmes for the poor and the underprivileged.

One such programme is Ipelegeng – a labour intensive public works project that allows the poor and unemployed to work for P400 (US$40) a month. Thousands enrolled in the programme. He also moved to establish constituency leagues – promoting sports with direct funding from the
government’s coffers. He is known to have donated blankets and food hampers to the rural poor, causing opposition politician, Dumelang Saleshando to referto him as “Father Christmas”.

The government internship programme for graduates, which is supposed to give fresh graduates an opportunity to gain experience before securing formal employment, was later discontinued for its lack of sustainability. Khama’s emerging authoritarianism is mostly a concern for urban dwellers, who complain that the president is throwing money at problems without providing sustainable solutions for employment.

They are also concerned by the many anomalies of the Khama administration’s foreign policy. Under Khama, Botswana has enjoyed improving relations with the dictatorial Swazi monarchy, while strongly condemning similarly chaotically governed countries, such as Zimbabwe and Lesotho.

To some extent, Khama has won favour among ordinary SADC citizens, who view him as
a no-nonsense African statesman according to media reports. He will be remembered for his disdain for international gatherings of leaders, having preferred to send his vice president to AU and UN “talk shops”.

The constitution bars Khama from running again in 2019 and he will be succeeded by an altogether duller figure, current BDP chair Mokgweetsi Masisi. He is new in politics, and is yet to consolidate his political base within the BDP. Observers say Masisi lacks the charisma most of his competitors in the opposition enjoy.

Meanwhile, tourism is one of the president’s passions. He has 5% shareholding in Linyanti Investments, a subsidiary of JSE-listed Wilderness Safari, and several other concessions in wildlife-rich Okavango Delta. Unlike his predecessors, Khama, 64, will leave office while fit enough to pursue a full-time job. Parliament recently amended the Presidents Pensions and Retirement Act to allow him to take up a full-time job after leaving office.