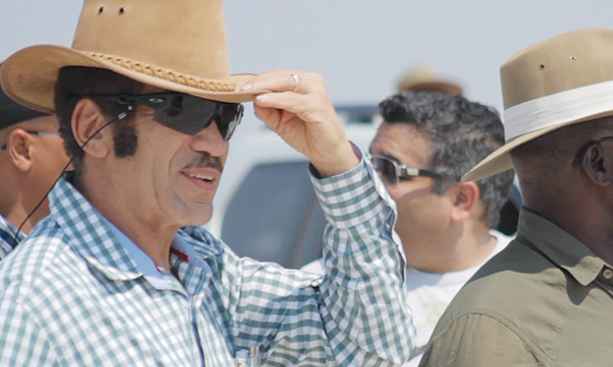 INK Centre for Investigate Journalism and The Sunday Standard, in a joint collaboration reveal their findings on the role the Botswana Defence Force played in performing errands for President Ian Khama at his private property on the outskirts of Mosu using tax – payers’ resources.

by INK Reporters
The investigation over a period of 6 month involved the arrests of INK journalists, the acquisition of satellite images and the carrying out of an investigation into how, for over four years, the President has been using government resources to develop his private property.
The investigations reveal a systematic effort by the government to obscure the role played by the military in the development of Khama’s private property. The deliberate misinformation and non-disclosures by Government on the role of the Botswana Defence Force and Security Services in contravention to the provisions of the Constitution in respect of freedom of information, illustrate a deep seeded apathy towards the taxpayer.  Now we know why President Khama and those within his immediate circle want to hide information on the development; there have been a number of irregularities in Mosu, including allegations of extending land boundaries beyond those which he had been allocated, and using special military budgets as opposed to funds from DIS, as previously claimed.
Media interest in Mosu dates back to 2013 when the Sunday Standard first broke the story on the involvement of the BDF in developing an airstrip for the president. In a clear attempt to protect the president, both Minister Mokgweetsi Masisi at the time and government spokesperson Jeff Ramsay got themselves entangled in embarrassing inconsistencies. They claimed that the airstrip does not belong to the president, while simultaneously arguing that Mosu and its developments were an official benefit extended to all former presidents. INK and The Sunday Standard can now reveal that Governments explanations are deliberately deceptive.
This is what we know:
The decision to publish the findings of our investigations now, following a six-month in-depth fact finding exercise has been necessitated by attempts from the Office of the President to spin and sanitise the developments, as well as the ongoing surreptitious overtures to prohibit the publication of the investigations.

Former BDF commander speaks on Mosu
INK and The Sunday Standard are alive to the fact that in spite of the constitutional provisions that ensure the public’s right to receive information, ordinary Batswana are denied the ability to make informed opinions on how those who hold political office use their taxes due to a lack of information. We endeavour to enlighten and inform the public as provided by the national Constitution.
As Media organisations, the 4th Estate, it is our duty, both to our readers and to the broader public to ensure that we perform our oversight function of the three arms of government– and we are determined to ensure that the public has the benefit not only of the unvarnished truth and but furthermore that those in positions of authority are held to account for their actions.
We, as the media, and as responsible citizens, are alive to the sensitive nature and security concerns pertaining to gazetted residences of Heads of State as well as their right to privacy. We have taken extensive steps to safeguard against these concerns and to respect such restrictions, within the purview of applicable legislation.
The conduct of politicians, and particularly a President of a liberal democratic state, such as ours, is open to public scrutiny. The overwhelming public interest and the benefit to the public, in engaging in an informed discussion and understanding of how a Head of State has used national resources, be it in the form of land or monetary benefits underpins the public’s right to freedom of expression.
This is particularly so in a country with a government that shuns public disclosure of information and embraces official secrecy surrounding the construction of a presidential residence at the cost to tax-payers’ and public money. The Constitution provides that all citizens have the right to receive information, an essential aspect of a constitutional democracy. Our Government, has over the years declined to pass legislation to address the legal framework that meets this constitutional imperative. The broad ambit of the public’s right to information, under the Constitution, together with considerations of the national public interest have informed and driven INK and Sunday Standard’s position in piercing the veil of secrecy  that shrouds Mosu.
In exposing the findings, we have taken all reasonable steps to ensure the security and protection of our sources; sources that may be in harm’s way. We made sincere and serious efforts to provide those involved the opportunity to present their side of the story. Their responses have been dismal in their lack of candour and the clear obfuscation of issues our questionnaires raised. The BDF’s consistent refusal to shed light on their role in Mosu is disappointing. Their position renders any concerns they may have over security inapplicable to themselves as they have distanced themselves from any involvement with the developments in Mosu. The BDF is incapable, as a result of independently deciding what constitutes a security breach.
The recent decision by former commander of the BDF Lt. Gen Gaolatlhe Galebotswe, to engage in discussions with INK on the issue of Mosu, is a clear indication that there is nothing wrong with sharing information on matters of clear public interest.
: