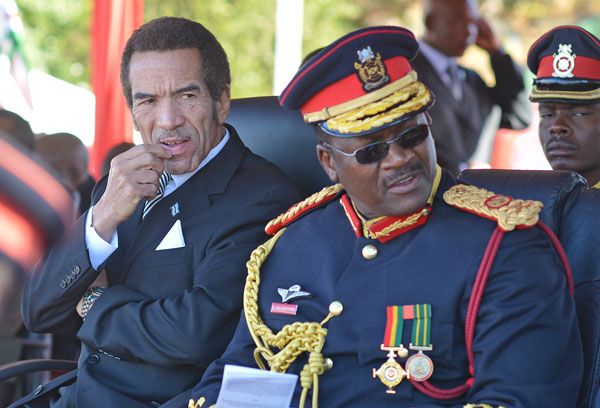 The Botswana Defence Force diverted an undisclosed amount from its Maintenance budget towards the construction of an airstrip at President Khama’s private residence in Mosu. This is over and above the P3 million approved by Parliament in 2013 for the project.

by INK reporters
The Botswana Defence Force diverted an undisclosed amount from its Maintenance budget towards the construction of an airstrip at President Khama’s private residence in Mosu. This is over and above the P3 million approved by Parliament in 2013 for the project.
Speaking to INK, as part of the media centre’s in-depth investigations, former Botswana Defence Force (BDF) commander Lieutenant General Gaolatlhe Galebotswe discussed the development at Mosu. Galebotswe has confirmed to INK, that the military constructed an airstrip on President Khama’s property in Mosu, to save the BDF costs of transporting the President to his private home.
Galebotswe revealed that he was directly involved in the planning and construction of the airstrip, at Mosu, in 2013, adding that he deployed several combat engineers to construct the airstrip because it was expensive to transport the President to his private residence using two CASA 212 aircrafts and a helicopter.
EXCLUSIVE: Khama’s Mosu built with public funds
Referring to Khama, the former Commander of the BDF said, “He uses two CASA 212 aircrafts, with the other being used as a back-up. He makes a stop at Orapa airport, where he would then board a helicopter to his compound in Mosu.”
Breaking silence on the involvement of the military at the President Ian Khama holiday home in Mosu, the former commander said it was unusual to use two aircrafts and that the arrangement “presents challenges to the BDF.”
Galebotswe retired from the army in September 2016 before overseeing the completion of the airstrip. Minister of Transport and Communications, Kitso Mokaila speaking on BTv, this week informed the public that the airstrip is now in use.
The construction of the airstrip, which was assigned to BDF’s combat engineers, Galebotswe discloses, was an exercise in frugality by the BDF. Galebotswe pointed out however that while BDF officers were used, “There were only a few instances where we had to hire two or three former BDF machine operators to assist in the project, otherwise we relied on our own personnel.” As for machinery used in the project the former army commander reveals that in coordination with the Office of the President they got assistance from local authorities.
It is the first time a senior military official, former or current, publicly discloses detailed information on the airstrip.
“This is not to say that we were complaining, in any case it is the duty of the BDF to take care of the president’s travelling needs,” the former commander said.  The airstrip is expected to cut the travel expenses to Mosu by half.
The BDF Act however imposes no such obligation on the BDF. The Intelligence and Security Act alone provides that the DISS (Directorate on Intelligence and Security Services) provides for the security detail of the president. As with the presidential motorcade, which is provided by Government the presidents air travel falls under the responsibility of Government. The president’s travel costs are catered for by the budget for the Office of the President.
: