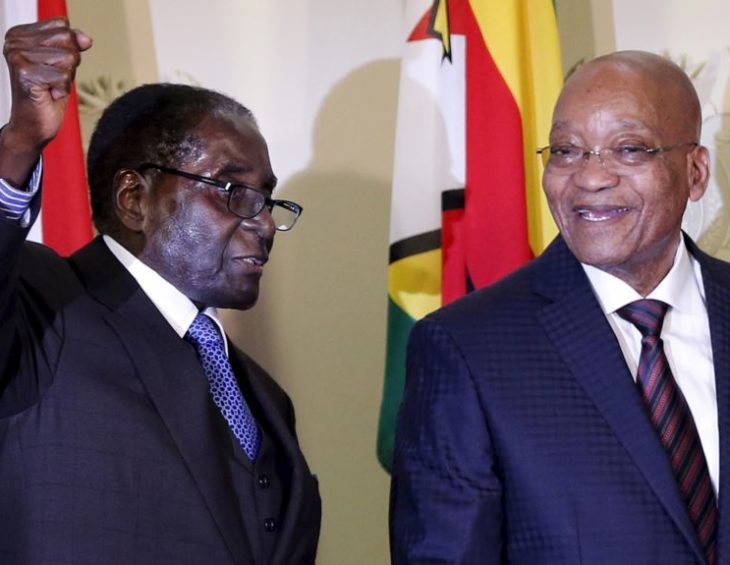 At war with the West

THE ANC has adopted as its official position a highly conspiratorial report that claims Western imperialist powers are working through opposition parties, NGOs and hash-tag campaigns such as Zuma Must Fall to force “regime change” in South Africa and other countries of the region.

The report, marked ‘confidential”, lumps together as “regime change manifestation” Mozambique’s rebel movement Renamo and the DA and EFF.

It also suggests that Western powers are establishing a military presence in the region to prepare for forcible regime change, if softer methods fail.

The document is based on a workshop of secretaries general of six former liberation movements in the region, including the ANC’s Gwede Mantashe.

This report appears to underpin an interaction between an ANC delegation and Botswana’s governing Botswana Democratic Party (BDP) in Gaborone last month.

President Ian Khama and other senior BDP officials, including vice-president Mokgweetsi Masisi and party secretary general Botsalo Ntuane, were reportedly at the meeting, which was widely reported in the Botswana press.

The delegation was led by Mantashe, whom The Sunday Standard described as “the principal promoter of the conspiracy theory that American and British interests are the invisible hand that is trying to effect regime change in the Southern African region”.

In February last year Mantashe said at an anti-racism march in Pretoria that the ANC was aware of regular meetings at the American embassy with young South Africans. “These meetings are about nothing else than mobilisation for regime change. We’re aware of a programme that takes young people to the US for six weeks, brings them back and plants them … in the campuses and everywhere,” he said.

In July last year, after an ANC national working committee meeting, Mantashe told journalists that protests in Zimbabwe and political instability in Mozambique were examples of “sponsored elements” aiming to bring about regime change.

In an interview this week, Mantashe confirmed that he was at the meeting with Khama and the BDP in Gaborone, characterising it as a normal party-to-party bilateral.

South Africa and Botswana will both hold general elections in two years’ time, against the background of waning support for the ruling parties in both countries.

In March the Sunday Standard reported that more than one risk assessment firm predicted a possible change of government in Botswana in the 2019 poll.

Asked whether the ANC believed there was an “imperialist plot” to overthrow it and other governing liberation movements in the region, Mantashe said the report represents the ANC’s official position. He would not be drawn on the evidence there is to support the claims.

“That is a research report… not an affidavit,” he said.

“If you can’t see them [the signs of a regime change plot in South Africa] I can’t make you see them.”

In his budget speech in Parliament last week, State Security Minister David Mahlobo said foreign governments are using underhand tactics in pursuit of “their narrow national interests and national security” in the process destabilising a number of countries, including South Africa.

“During the past year, they [foreign governments] continued their efforts, in close collaboration with negative domestic forces, to undermine our democratic and constitutional advances,” he claimed.

The liberation movements’ report draws parallels between the Mozambican rebel group Renamo and South Africa’s Democratic Alliance and Economic Freedom Fighters, saying that “the workshop drew further analogies of regime change manifestation in the intermittent resurgence of Renamo banditry in Mozambique, [and] the emergence of the … DA and EFF in South Africa, ostensibly spurred by the Marikana incident.”

Again referring to the Marikana massacre, in which police gunned down 34 mineworkers in 2012, it says the South African protest movement has a new tendency of “directly challenging state power or provoking the security forces of a target state, its police or army, into violent confrontation like what happened at Marikana”.

It lists “#tag campaigns on social media, such as #ZumaMustFall and #FeesMust Fall” as being among the “soft power” tactics used to advance the cause of regime change in the region.

“Soft power involves the creation and provision of support to generally anti-communist, anti-socialist, pro-capitalist and pro-imperialist movements in target countries,” it says.

“It … involves concerted moves aimed at subverting democratic processes and negatively exploiting the constitutional order in the target country.”

Also included in the “battery of tactical adjuncts available to soft power” listed in the report are:

The report claims that Western interests in southern Africa are seeking “to establish military domination, including military bases within the region, as an option for rapid escalation to hard power where soft power would have failed in pursuit of regime change”.

“The architects of regime change also create a plethora of foreign-directed and funded NGOs which act as Trojan horses, storm troopers and force multipliers for their subversive agenda in targeted countries,” the report adds.

It points a finger at the US Agency for International Development (USAID) as “the principal agency that promotes the strategic and economic interests of the USA across the globe as part of a new counter-insurgency doctrine”.

It alleges Western “quasi-private pseudo foundations”, such as the National Endowment for Democracy in the US, the UK’s Westminster Foundation, America’s Albert Einstein Institute and Germany’s Friedrich Ebert-Stiftung Foundation “launder funding and strategic aid to political parties, NGOs [and] student organisations” aimed at promoting the West’s agenda under the guise of strengthening democratic institutions.

The report portrays Zimbabwe as the prime target of the West’s regime change conspiracy. It describes the country as “having endured a virulent, sustained and unrelenting regime change assault since 1999 [and] has been more or less the laboratory and Zanu-PF the guinea pig in which the West has developed and tested all aspects of regime change variants, which it is now visiting upon virtually all the liberation movements of South Africa”.

“This onslaught’s objective is to remove Zanu-PF from power and replace it with a puppet regime that will be pliant in reversing the gains of the liberation struggle, not least the government’s land reform, indigenisation and economic empowerment programme.”

It claims the British government, through the Westminster Foundation, created the opposition Movement for Democratic Change as “the prime internal adjunct and Trojan horse for its regime change strategy in Zimbabwe”.