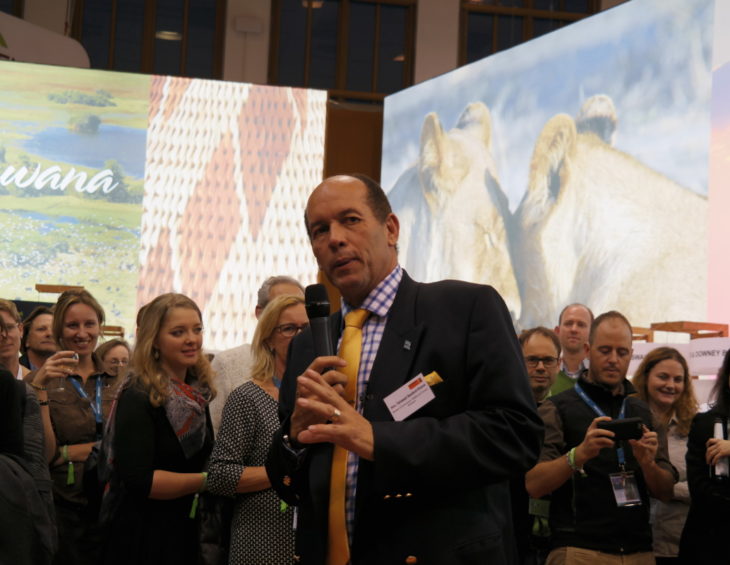 As the Minister of Environment, Natural Resources, Conservation and Tourism Tshekedi Khama and his brother the President Ian Khama enjoyed red carpet treatment at the recent ITB 2017 tourism fest, offices of his ministry went without water and phone connections due to unpaid bills.

Department of Tourism office lines were cut off and water shut down after the ministry failed to settle bills with service providers. Tshekedi Khama’s ministry paid P21.2 million for the right to partner in and displaying at the expensive tourism trade fair in Berlin(Internationale Tourismus-BörseBerlin) putting into question the ministry’s ability to manage its financial commitments and priorities.

President Ian Khama officiated at the ITB 2017, a global tourism indaba, a red carpet event, which attracted 39 tourism companies from Botswana. ITB 2017 attracted over 11 000 exhibitors in the tourism industry to share ideas and discuss the future of the industry. Big league tourism companies in Botswana such as John Chase, Wilderness Safaris and Ker and Downey graced the event.

The ministry could not settle a P100 000 telephone bill for Department of Tourism, resulting in a nationwide disconnection of telephone services in the department, according to sources within the ministry.

INK Centre for Investigative Journalism established that district tourism offices had their telephone lines disconnected after accruing arrears in excess of P100 000. Further, the Water Utilities Corporation (WUC) and Botswana Post are said to have issued strongly worded letters to the department threatening to terminate their services if the department does not honour its obligation. INK Centre could not establish the total amount owed to WUC and Botswana Post. By press time Botswana Telecommunication Corporations (BTCL) had not responded to questions sent to them.

Three sources within the ministry independently confirmed that the Department of Tourism is cash strapped because the ministry does not give it the necessary support.
“Morale is low at that Department… one day we will go without salaries,” an officer at the Department of Corporate Services said on grounds of anonymity, for fear of reprisals.
Another added that scores of desperate investors in the hospitality industry are left without services because the Department is not “functioning properly” referring to lack of telephone connectivity.

The third source who also did not want to be identified because of the sensitivity surrounding the matter disclosed that the departments are generally not treated equally, citing the Department of Wildlife and National Parks, which he disclosed had received the largest share of the budget but “fails to compensate farmers” to the tune of P12 million. On the other hand, he said, the Department of Tourism – which provides policy direction and licenses lodges and hotels – is key in the Ministry of Environment, Natural Resources, Conservation and Tourism. It collects over P30 million in levies, penalties and annual license fees from payments it charges lodges and campsites. At 12 percent, the tourism sector is the second largest contributor to the Gross Domestic Product.

INK Centre’s numerous attempts to call the Gaborone Tourism Office on its landline drew blanks as the line did not go through, including the direct line to the Director and his deputy. Four District Tourism Offices; in Maun, Ghanzi, Tsabong, and Kasane had their lines disconnected on Wednesday. The only landline that appeared to work was that of the District Tourism Office in Francistown, but an officer who picked up the phone admitted that they are in arrears and can only receive calls. “We cant call, ask them,” he said.
While it is not clear how the ministry raised the P21.2 million to sponsor the red carpet event, INK Centre can disclose that part of the money was controversially withdrawn from the Tourism Industry Levy Management Fund through BTO. The Fund is used to develop the hospitality industry but the withdrawal of P10 million to part-fund the Berlin extravagance has raised eyebrows in the ministry.

Publicly available information shows that the ministry spent about P633, 000 for the floor space at Hall 20 and stand construction as part of the strategy to market Botswana’s tourism products. BTO also hosted a dinner event for the guests exceeding 11300 from 180 countries. It was the first time government invested such considerable amounts in hosting such an extravagant show outside the country. Permanent Secretary to the Ministry, Jimmy Opelo directed INK Centre to public relations office whose phone also rang unanswered.

Tshekedi Khama was defiant when contacted by this reporter yesterday, blaming the collapse in bill payment to a shortfall in the Ministry’s allocated annual budget. He says this financial year the Ministry has been allocated P619m, a “mere P2m addition” to the last financial year’s allocation. He says financial problems at the ministry run deep. “About five weeks ago the Wildlife Department ran out of petrol because there was no money for petrol” he explained. Tshekedi says the ministry faces budgetary challenges due to climate change and increased tourist traffic, although he did not comment on the spending at the Berlin gathering.

Wasteful expenditure
Khama is no stranger to controversial spending. He has been at the centre of a scandal after purchasing a luxurious jet worth P50 million at the taxpayers’ expense, wrongfully claiming it was for anti-poaching missions – despite objections by an aviation expert who said anonymously that the aircraft was not designed for such a purpose. Newspaper reports show that last year alone, BTO spent about P6 million in one of the biggest aviation shows in the country. He also controversially,facilitated the signature of BTO on a P17 million contract with a Dubai tourism firm and was later forced to apologize and cancel the deal.