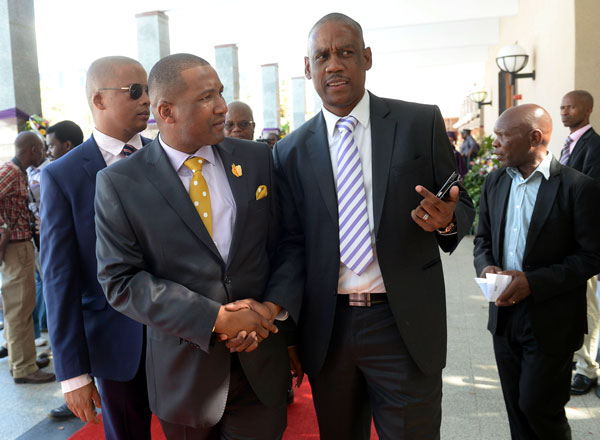 Inside the Polokwane détente

What happened in Polokwane, may as well as stay in Polokwane. A year after the Polokwane secret détente, INK Centre for Investigative Journalism reporter NTIBINYANE NTIBINYANE pieces together an outing that brought together the four leaders Botswana’s main opposition parties

It was something that needed to be done, at least before the formal opposition talks began. A genuine camaraderie between the leaders was needed to pave way for the formal opposition unity talks. After weeks of planning, postponements, off course deviations and frustrations, the time was perfect for the retreat. The silly political season was in recess; everyone was preoccupied with the festive season; the social-media political pundits were on break.

For the leaders of the country’s major opposition political parties, the holiday period offered an opportunity ‘sneak out’ of the country to begin what is often known as ‘talks before talks’ in the political circles. Botswana Movement for Democratic Change’s leader Ndaba Gaolathe was in South Africa and so was the Botswana Congress Party’s leader Dumelang Saleshando. For the Botswana National Front and Umbrella for Democratic Change leader, Duma Boko it was just a matter of few hours’ drive to this secret place. Motlatsi Molapise of the Botswana Peoples Party had delegated senior party official Richard Gudu. The leaders did not bring their spouses along. The Protea Hotel Ranch Resort in Polokwane was a perfect get-a-way out for the four leaders. And over the next three days, from December 28 to 31, it offered everything that Gaborone could not offer. It offered secrecy. Situated 25km south of Polokwane, the four-star hotel comprises of 1000 hectares of pristine Limpopo province bush-veld, according to the hotel’s website. The meeting was off the radar from curious journalists, anxious party members, and snooping intelligence agents. The financier of the retreat was a Gaborone businessman sympathetic to the UDC project.

The ‘escape’ to the Polokwane was well managed. The retreat did not leak, at least for a couple of months after the event. Not even senior party members of the parties involved were aware of the retreat.  The men tasked with coordinating the retreat, the UDC’s spin doctor-in-chief Moeti Mohwasa and BCP’s presidential spokesperson Martin Dingake did not give away the game either. The secret meeting was well kept. The two men also attended the Polokwane retreat and worked together on the retreat’s programme though it was never followed to the letter, instead being interwoven with the adoption of a more informal approach.

For the first time the leaders of the four parties learned to “hang out” with each other more informally, shared jokes and played sport. The attire was casual, and so was the language. It was however the game of table tennis that broke the ice between the four leaders and paved way for more formal talks the following day.

At a press conference to announce the opposition deal Saleshando and Boko referred to the Polokwane retreat as a defining moment for the opposition talks, albeit succinctly. Saleshando joked about how he emerged triumphant during a table tennis match between the four leaders. For his part Boko conceded that as a former armature footballer he had not played table tennis before and was handicapped during matches.

Only Saleshando and Gaolathe were familiar with the sport and took turns to coach other leaders. The table tennis matches dragged on for hours, at one point lasting the entire afternoon. The epic match was between Gaolathe and Saleshando. It was epic in the sense that the two men had played the sport before. Their match was highly contested. In the end Saleshando won. The leaders and their trusted aides, also watched English Premier League matches together at the hotel lounge. The leaders supported different EPL teams. For example, Duma Boko supports Manchester United, Ndaba is a Liverpool fan, while Saleshando is a Chelsea fan.  Besides sporting activities, the leaders visited places such as the Mall of the North, Tzaneen and drove around the city of Polokwane.

After a day of sport, jokes and laughter, the leaders finally sat down on the 30th of December to agree on the principle of corporation. The meetings were highly informal in nature and structure. The underlying principle, that the leadership saw it proper to adopt was to come together and work for the common good of Batswana, defined the way forward.  Boko directed and led the discussions. It was at the table, and during the discussions that differences and even new alliances emerged. It was here that Boko and Saleshando found each other. The two agreed on several issues. Gaolathe and Gudu were in some cases on the same corner, though not too distant from the overall conversation. For example, Gaolathe and Gudu initially wanted BCP to apply for the UDC membership, while the Saleshando and Boko felt that the four parties should engage in direct unity negotiations. The other issue concerned the inclusion of the mediators. Boko and Saleshando were for self-mediation while Gaolathe and Gudu felt that outside mediators should be engaged. The participation of the retreat organizers, Mohwasa and Dingake was limited.

After three-day outing, Saleshando and Gaolathe left together in Saleshando’s car, while Duma Boko left with his right hand man Elliot Moshoke (who played no part in the talks). Richard Gudu and Mohwasa used the same car, while Dingake used his own car. This week Mohwasa confirmed the Polokwane meeting but stressed that the meeting was for the four leaders to lay the foundations for the talks noting that “Myself and Martin (Dingake) were merely there to facilitate and we didn’t take part in the discussions.”