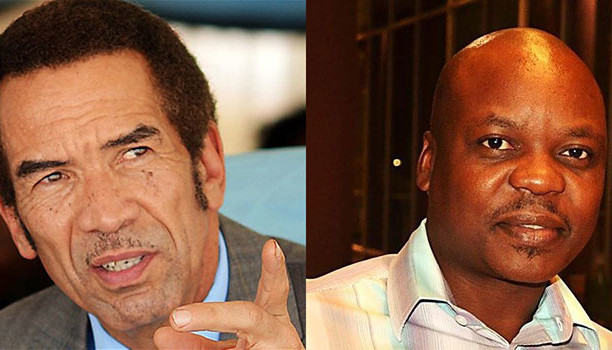 Hardly a year after the arrest of three Botswana Gazette journalists, the empire strikes again! Yet another worrying development. Another careless arrest of a journalist in a country considered Africa’s shining example of democracy and good governance. This time, the Office of President onslaught on the private media happened so early into 2016.

Sonny Serite, a freelance journalist working for Botswana Gazette was stopped near the Office of President by two plain clothes officers and later locked up at Gaborone Police Station under Section 317 (2) of the Penal Code of 1986, which, in theory, when read with sub section 1 carries either a death sentence or 14 years in prison.
Serite, together with Abueng Sebola, a Records Officer at OP, are currently on bail after spending three days in detention.

The arrest gives a clear idea of where President Ian Khama regime wishes to take this country in terms of accountability and respect of press freedom. It uses scare tactics to frustrate the work of investigative journalism and sends a chilling effect to would-be deep throats at government enclave and elsewhere. It is a stark reminder that Khama’s repressive regime remains an affront to fundamental rights such as freedom of the press.

But how did we get where we are? Botswana is not a firm believer in press freedom and has repeatedly used its power to promote all laws that criminalise journalism. Freedom House now rates the country as partly free, a significant downgrading compared to previous rankings.
President Khama’s government has resisted repealing or reviewing all laws that hinder the work of journalists. The ruling Botswana Democratic Party often uses its majority in parliament to block attempts to call for a law on freedom of information. Younger democracies such as South Africa have made strides in promoting media freedom. Take for example the Promotion of Access to Information Act of 2000 of South Africa which gives effect to the constitutional right to any information held by the state and information held by the private bodies that is required for the exercise and protection of any rights.

At INK CIJ, we condemn the arrest of Serite and Sebola – which comes 10 months after the detention of Botswana Gazette editor, Lawrence Seretse managing editor Shike Olsen, as well as reporter, Innocent Selatlhwa over a corruption expose – as undemocratic, unnecessary and in the long run intolerable and call for a comprehensive legislation incorporating journalists’ right to access information.

With the existence of such legislation, accessing public records would not require people like Sebola to take risks that land them in courts.

Let us be clear. We support Sebola’s thoughtful intervention, which brought new hope to investigative journalism. He is an heroic whistleblower and his efforts will not go unnoticed. He was driven by public interest to expose wrongdoing at OP. Both Serite and Sebola stand for what INK Centre for Investigative Journalism stands for – promoting and serving democracy by revealing abuses of power, corruption and betrayal of public trust. Without them, citizens’ ability to monitor those in power is obviously diminished.

We urge the police to investigate, and not to arrest in order to investigate. This is unhelpful and smacks of repression to arrest journalists on issues that are not really criminal but is part of their work, in this case to expose the rot in our society.

A debate about journalists’ rights to access information is best advanced by that all-pervading BDP slogan: “nothing to hide, nothing to fear.” We cannot have a media that relies solely on the good will of public servants to get information, and it is too much to expect of the government and other public bodies to deliver it without the backing of an appropriate provision, which breathes life into Section 12 of the Constitution. But surely we can have an open and balanced discussion about how we accommodate the private press as a true watchdog that promotes and serves democracy, while safeguarding the intimacy and dignity rightly craved by human beings.