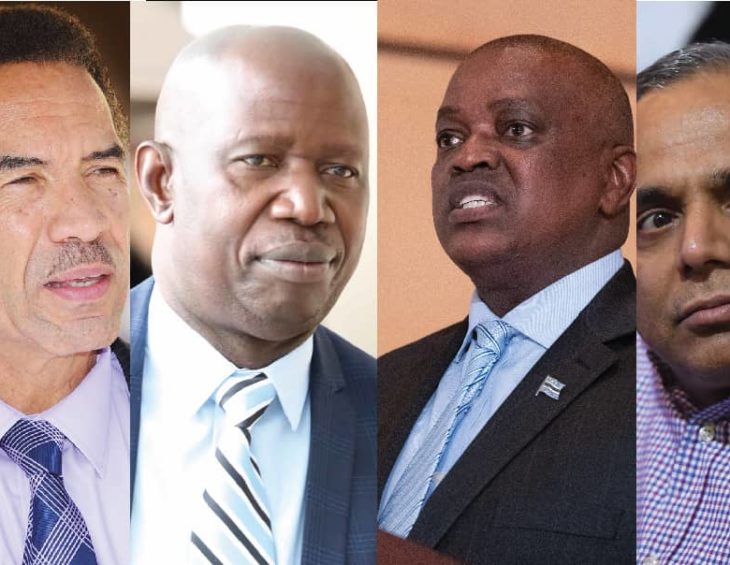 BPF on a path to end Masisi greed – Guma Moyo

In a candid questions and answers interview, former Botswana Democratic Party (BDP) chairman, Samson Moyo Guma discusses the most pressing issues affecting the country. He is clearly taken aback by what he sees as tribalistic tendencies by President Mokgweetsi Masisi and is scathing about BDP seeming lack of competent leaders. He says his new party, the BPF will stop BDP victory in 2024. He spoke to INK Centre for Investigative Journalism Editor, Joel Konopo.

INK: When you left last year, there are those who said you were escaping persecution. What is the truth?

INK: Take us through events that led you to leave the country. How did you know you were not safe? Who or what was posing this threat to your life?

INK: What has changed that informed your decision to return?

INK: You applied for Botswana Patriotic Front (BPF) membership. Do you still want to represent the people of Tati East in future?

GUMA: I will ask for permission from the party to stand in Tati East. If there are primary elections I will stand. In the meantime, I will continue doing community projects in Tati East.

INK: Having been a member of the Botswana Democratic Party (BDP) for so many years, how would you characterise it now?

GUMA: I don’t think BDP under His Excellency Mokgweetsi Masisi can take the country to greater heights. He has divided the nation and destroyed the fundamental values of this nation which is unity. Please remind yourself what the national anthem says. There is a Setswana saying: Mmua lebe o bua la gagwe… Mafoko a kgotla a mantle otlhe... We are Batswana made of different tribes and cultures. Our recognition of unity in diversity is what has built us as a nation. But His Excellency has divided us along tribal lines. I will never forget the words he said about me being a descendent of Mzilikazi who is destroying this country. He said this to a councilor in Serowe. He is correct, of course, I am Ndebele who never applied to be born in Botswana. I am proud of who I am. A Motswana. Tribalism is in his blood and should not be allowed to pursue this terrible agenda. I am not alone with this strong view.

INK: Has the BDP been weakened?

GUMA: The BDP did not win the elections [In October 2019]. And they know it. But we have accepted that. They are in power by default. They will not win the next election. Disaster is awaiting us.

INK: What kind of disaster are you talking about?

GUMA: The current government has no direction. It is characterized by poor management, corruption, and abuse of power. Our nation is sadly divided along tribal and regional lines. The current regime has no roadmap or vision.

INK: Some people will think you are now talking about President Ian Khama?

INK: Botswana economic and developmental success has been documented. Is it a true representation of the state of affairs?

GUMA: During my time in government in 2008, we were driving Nation Development 9 when there was an economic meltdown. We survived. I was Acting Minister of Finance tasked by His Excellency [Ian Khama] to come out with a strategy to take us out of that difficult situation. We presented a revised National Development Plan to Cabinet which made us survive the years with a clean budget surplus. The team was driven by prudent financial guidelines led by a motivated and disciplined civil service. Not everything was smooth though. The Vision 2016 was a driving reminder in planning and nation unity was always in all of us

INK: What is your take in reports that President Masisi has a business relationship with Choppies CEO, Ramachandra Ottapathu?

GUMA: Setswana sare tlhong Botho. It is not for me to judge. Ram is a friend and I urge him to revise his business model. It is not sustainable.

Ram is a friend and I urge him to revise his business model. It is not sustainable – Guma

INK: Choppies is the biggest retain chain in the country. How is its business model not sustainable?

GUMA: It has been de-listed on the stock exchange. It is under audit. They should review their business model after audit.

INK: Should the president disengage from private business upon assuming office?

GUMA: Presidents are looked after even when their term has expired. They need nothing. Being involved in business as a President is greed and being unfaithful to the people who put you in the seat in trust. A President is a custodian of our values and assets. He can’t cook for us and dish for himself first. Perceptions are stronger than facts. He should not be competing in an environment where he then becomes a referee of his own game.

INK: There has been accusations that you are in arrears. Do you owe the taxman?

GUMA: As far as I am concerned, I don’t owe taxes. I gave them audited statements which revealed that they owe me. What Botswana Unified Revenue Services is doing to me is abuse of power and a politically driven witch hunt. I will deal with that at some stage. I will not tolerate abuse by any person.

INK: Where do the allegation come from?

GUMA: Over the past 3 years, I survived on overdrafts and loans. Check my bank accounts. I had no taxable income. But it is a situation I will deal with legally.

INK: What is your take on the $48 million that was allegedly laundered in RSA.

INK: Is there anyone capable to be the President, currently, at BDP?

GUMA: Leaders emerge in an environment where everyone is allowed to participate in the decision making. I don’t think that environment exists in the BDP. The current leadership is characterized by personalized power. Masisi is insecure and wants to be venerated. That is why they created a song to praise him. Masisi ware re bitsa. You have to recognise him. But honour is bestowed and respect earned.

INK: When you get back home, what will be your role in trying to solve youth unemployment?

GUMA: The way to address youth employment is through economic growth that allows youth a choice to pursue their dreams. They should be part of a process to grow the economy. They should not be spectators. You need to provide resources for them to thrive. You need to look at what can grow the economy, that’s when youth will love you. For example, you should spend on infrastructure that assists in short- and long-term economic growth. You also have to spend on maintenance of the existing assets and reduce import bill on agricultural products by spending on agriculture.

INK: Do you think the opposition is finally ready to lead? Why?

GUMA: The majority of us in the BPF have been in a leadership position. I don’t think there is anything we can learn from some ungrateful BDP leaders who are in position because of the experience we have and the sacrifices we made. President Khama handed over power to Masisi. This was based on mutual trust. He took him around the country and urged Batswana to support him. We are the kind of leaders that Batswana can trust. Don’t compare us with the current tribalistic leaders in the BDP. I will use this word about His Excellency because that is what he is.

INK: How do you think the independence of Parliament can be safeguarded from the Executive?

GUMA: If the President still appoints members of his cabinet from parliament there will never be independence of parliament and proper parliamentary oversight. There shall be no separation of powers.

INK: What is your take on Presidential elections. Is it not the right time for our oversight institutions to fall under a parliamentary committee and their directors be appointed by Parliament?

GUMA: We need to review the Constitution. I prefer the direct election of the President where the President can appoint competent people from persons not necessarily members of parliament. Those institutions are part of the government and cannot be that independent from the executive. You can’t run a government without security. DISS is proper where it is. Read the Act carefully what its role is. Learn to separate persons from an institution. Currently, we have a weak and divisive President but we are commanded to respect him and protect him.

INK: Many people were of the view that President Khama was heavy handed in his approach with some calling him a dictator. When President Masisi took over, there was a lot of high expectations that he will be more liberal (promote media freedoms, e.g. repeal Media Practitioners Act, and more inclusive and accommodate the opposition, e.g. All Party Conferences). As a politician, you worked with both of them. Do you think President Masisi lived up to those expectations?

GUMA: Masisi can’t be trusted and I don’t think he trusts himself. Khama had and still has a heart. His Excellency Masisi is not only a dictator but cruel and ignorant. His understanding of leadership and the economy is pathetic. He is deceptive and good at it. Khama was at times harsh and too trusting. He tried and believed in unity that’s why he appointed Masisi. He thought this was the man who will build us. I didn’t know he secretary of Pitso ya Batswana a separatist and supremacist organisation that hated minority tribes with passion. In particular the Kalangas.