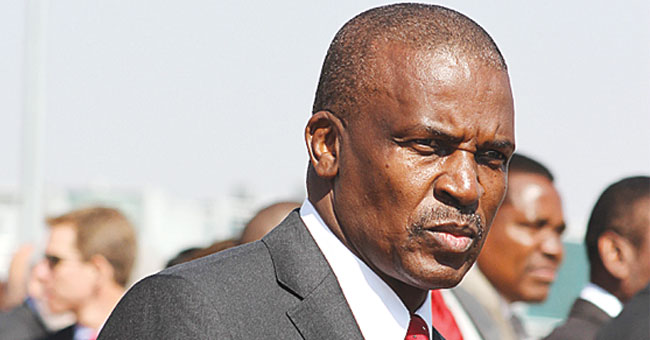 The once feared head of Botswana’s Directorate of Intelligence Services (DIS), Isaac Kgosi, is in police custody after his arrest at Gaborone’s Sir Seretse Khama Airport on suspicion of tax evasion.

The arrest sent shock waves through Botswana, amid fears that it could worsen tensions between President Mogweetsi Masisi and his predecessor, Ian Khama.

Kgosi is Khama’s close ally. One of Masisi’s first acts as president was to fire him as intelligence boss.

During his arrest on Tuesday this week, he loudly threatened to topple the government.

Though not yet charged, it is understood that Kgosi is being investigated in connection with alleged tax evasion.

The DIS, the Botswana Police and the Botswana Revenue Services spent the better part of Wednesday searching his house in the affluent Gaborone suburb of Phakalane Estates.

The once feared former spy chief was greeted with an arrest warrant and handcuffs on his return from a trip to Asia and the Middle East, accompanied by his wife and children.

The arrest and raid on his house were coordinated by his successor, DIS director general Peter Magosi.

Tempers flared at the airport as Kgosi demanded to know why he was being arrested in such a public way. As he was being handcuffed in the open lobby of the airport, he protested that the whole exercise was intended to embarrass him.

He started hurling insults at his captors, declaring that he had always worked hard for Botswana.

“You guys are driving me to do things I never thought I will do. I am going to topple the government, I’m telling you,” he said.

His lawyer, Unoda Mack, dismissed the statement as “a flight of hyperbole”, saying that had been caught off guard.

He said his client was calmer on Wednesday and cooperating with the authorities.

Speaking to the media, Magosi said Kgosi would remain in custody while investigations continue. He said it was still too early to tell if he would finish up in court, as the investigation was in its infancy.

“All we can say now is that there was a joint operation between us, the Botswana police and [the revenue service]. Our investigations required us to search his home,” he said.

It is understood that Kgosi’s other properties, including another house in Gaborone and farms, will also be searched.

Kgosi’s attorneys confirmed that he spent the night in custody.

“From the document that we have seen, they are looking for documents or storage devices that could assist in an investigation regarding tax issues. That’s all the document discloses,” Mack said.

Political analyst Leonard Sesa said that the manner of Kgosi’s arrest would only deepen the rift between Khama and Masisi.

“I have long said that the war between the president and his predecessor is no ordinary conflict,” he said. “If it is not nipped in the bud, this thing is going to end up in civil war.

“The way Kgosi was arrested raised eyebrows,” Sesa said. “But the way he threatened the state was very disappointing. It was a threat to national security and can’t be left hanging.”

“The revenue service had suspicions that there might be irregularities regarding tax and they have the right to investigate,” he said.

“While it was very foolish for Kgosi to talk about toppling the government, I think it was only out of frustration because he is used to having so much power. He was trying to intimidate the arresting officers,” he said.

The DISS was established amid controversy shortly after Khama assumed office in 2008.

Money from the government’s Disaster Fund were diverted to help establish the organisation, amid strong resistance from opposition MPs and some backbenches from the ruling Botswana Democratic Party.

Kgosi, at the time Khama’s private secretary, was appointed to head the new body. With presidential support he quickly turned it into the most powerful security organ in the country. Well-funded and largely unaccountable, the DIS was shielded by Khama – despite allegations of corruption against Kgosi and human rights abuses.